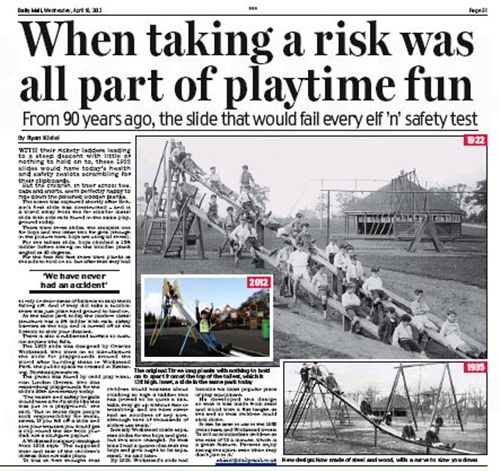 Historians have uncovered photos of the world's FIRST children's SLIDE - built 90 YEARS ago from a plank of wood with NO sides and NO safety surface.

Girls and boys can be seen climbing the dangerously steep four-metre high ladder, then pushing themselves down the long wooden plank which has nothing to stop them falling off.

The primitive piece of play equipment was constructed in 1922 in Kettering, Northamptonshire - the first park of its kind in the UK. It was designed by owner Charles Wicksteed, who initially made slides for his park, then went on to manufacture and sell them around the world.

"These days the health and safety brigade would have a fit if a slide like this was put in a children's playground," said national child play historian Linden Groves, whose research unearthed the anniversary. "But in those days people took responsibility for themselves. If you fell off a slide and tore your trousers you would get a clip round the ear from your dad, not a six figure payout. Wicksteed's slide was a pioneering piece of play equipment and very popular with girls and boys as the pictures show." 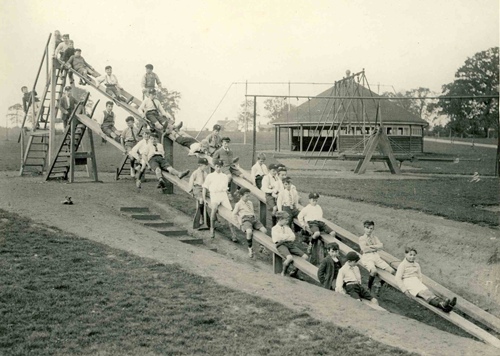 The Wicksteed company catalogue for 1924 gives an illustration of the first slide and states that remarkably there were no accidents. The description says:

"The planks are faced with teak, and as this does not splinter it keeps a smooth glossy surface. The supposed wear and tear of the children's clothes does not take place. If the plank were not smooth the children could not slide down, and if it is smooth no wear takes place. It was at first thought that children would hesitate about climbing so high a ladder. This has proved to be quite a mistake, they go up without fear or trembling, and we have never had an accident of any sort, although tens of thousands of sliders use them."

Initially Wicksteed made separate slides for the boys and girls, which were labelled to avoid confusion. The children had to sit astride the wooden planks and hold onto the edges to stop themselves falling off. The division of the genders was common in early playgrounds but Wicksteed later became pioneering in breaking down the boundaries.

"I thought I would make a slide: first for the boys. This was so much appreciated that I made a better one for the girls: the boys got jealous of this, so I made a still better one for them," he wrote in 1928. "At that time I had a quaint idea that the boys and girls ought to be separated."

By 1929 Wicksteed's slide had become his most popular piece of play equipment. He developed the design so it was made from steel and wood with a flat length at the end as we have today. Children could slow down without shooting straight onto the ground. 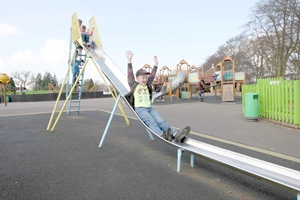 He said: "These up-to-date slides... are curved at the bottom, ending in an almost horizontal plank of sufficient length to reduce the speed at the end of the slide to such an extent as to effectually prevent any danger in alighting. The slide is the most popular appliance we make. It will accommodate children at the rate of 20 a minute, which is a great feature. Parents enjoy seeing the sport, even when they don't join in it."

Five years later his slides were completely made from metal with the added safety measure of handlebars, sides and a cabin at the top. "If a child becomes nervous it need not go down the chute, but can remain on the platform until the steps are clear," he said at the time.

Wicksteed, who was born in 1847 in Leeds, opened Wicksteed Park after the First World War because he wanted to give something back to the town he loved. His park allowed children to play freely and for families to enjoy outdoor life together. As well as the slide he is also credited with introducing one of the world's first water chutes in 1926. It is one of only three still remaining in operation in the UK and was described as "being a bit like sitting in a skip and being thrown into a river."