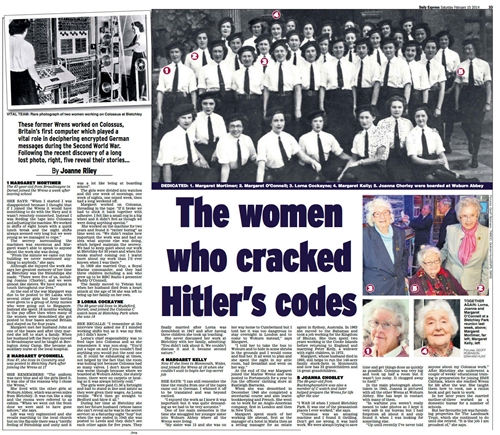 An extremely rare picture of a team of WOMEN code-breakers who operated Colossus – the world’s first electronic computer - has been uncovered on its 70th anniversary.

The photo, which has never been seen before, has been kept hidden in a bureau by veteran Joanna Chorley for seven decades.

The 88-year-old was part of the Colossus C watch at Bletchley Park in Buckinghamshire during the Second World War and one of the world’s first computer operators. She found the picture of the Women’s Royal Naval Service (Wrens), which shows her dressed in a smart beret and tie, when she was having a clear out and it is believed to be one of a handful in existence. It was taken at the end of the Second World War and has come to light as Colossus celebrates its 70th anniversary.

“In war time you weren’t really meant to take photos so I kept it very safe in my bureau, but I had forgotten all about it and only found it when I was looking for something else,” said Joanna, from Buckinghamshire. “Bletchley Park was one of the pleasantest places I’ve worked in, you knew the work was worthwhile and Colossus was an amazing machine and I found it thrilling. But it was challenging and there was always a sense of urgency and a need to get things done as quickly as possible. Colossus was very big and took up half a room, but it wasn’t too noisy, it chugged away to itself. I feel very touched to be able join in the 70th celebrations of Colossus – after all I was just a very small cog in a big wheel.” 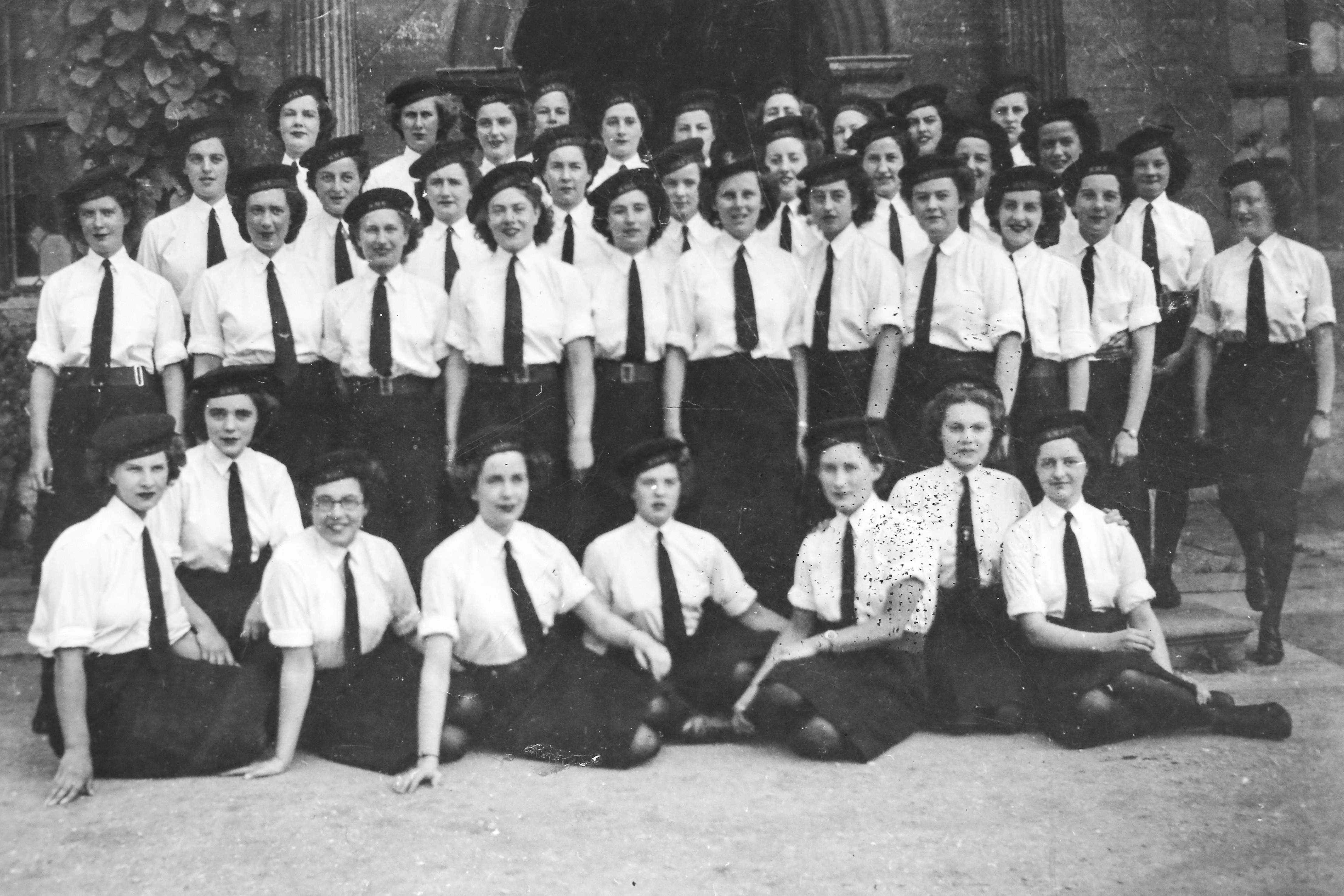 It was on 5 February 1944 that Colossus Mk I attacked its first Lorenz-encrypted message, the highly sophisticated cipher used in communications between Hitler and his generals during World War II. Colossus was designed by British telephone engineer Tommy Flowers to speed up code-breaking of the complex Lorenz cipher. By the end of the war there were ten functioning Colossi and they had a decisive impact in shortening the war and saving countless lives. Colossus was the first electronic computer, but news of its existence was kept top secret for 30 years because of the sophistication and sensitivity surrounding the encryption it had helped to break.

The computer was enormous, measuring 7ft high by 17ft wide and 11ft deep, weighing a tonne and using 8kW of power. It incorporated 2,500 valves, 501 of which are thyraton switches, about 100 logic gates and 10,000 resistors connected by 7 km of wiring. Reading 5000 characters per second - faster than anything ever produced commercially ever since – it found the start wheel positions of Lorenz messages. It usually took Colossus up to three or four hours to establish the start wheel positions of messages, but it is often surmised that the Allies might have been reading some of the decrypted messages before they reached German High Command.

By the end of the war, 63 million characters of high-grade German messages had been decrypted by the 550 people working on breaking Lorenz.

Tim Reynolds, chair of The National Museum of Computing, said: “The achievements of those who worked at Bletchley Park are humbling. Bill Tutte's ingenuity in working out how the Lorenz machine worked without ever having seen it, the skill of those in the Testery who broke the cipher by hand, and the creation of the world’s first electronic computer Colossus to speed up code-breaking process are feats almost beyond comprehension. The working Colossus rebuilt by the late Tony Sale and his team provides a mesmerising start to our story of the history of computing. It fascinates everyone who visits it and we see on a daily basis the inspiration it provides to school groups who visit the Museum. This day is in honour of all the men and women who worked on breaking the Lorenz cipher.”

German teleprinter signals encrypted by Lorenz machines were first heard in Britain by police officers on the south coast listening for possible spy transmissions in 1940. 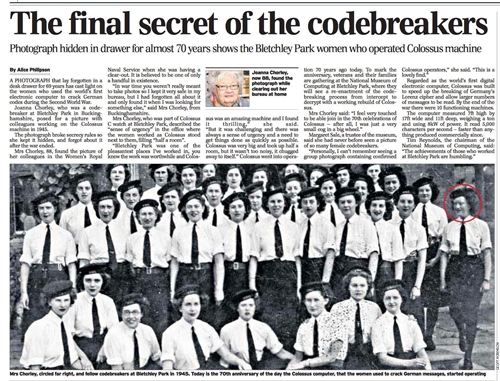 In August 1941, a procedural error by a German operator enabled Colonel John Tiltman, a top code-breaker at Bletchley Park, to decipher a message. Brilliant mathematician Bill Tutte began working on the case and was able to deduce the complete logical structure of the cipher machine, which we now know as Lorenz. Code-breakers under Colonel Tester began breaking the codes by hand, but this was very time consuming.

The head of the so-called Newmanry, Max Newman, a mathematician at Bletchley Park, believed certain aspects of the decryption process could be automated.

Initially electro-mechanical Robinson machines (named after the cartoonist Heath Robinson) were used to find the start positions of the Lorenz wheels to speed up code-breaking. But the Robinson machines had shortcomings. Tommy Flowers, a Post Office electronics engineer at Dollis Hill, was asked to improve upon the Robinsons, but instead designed Colossus, the world's first electronic computer, which enabled the Lorenz start-wheel positions to be found in a few hours, thereby greatly shortening the code-breaking process. Colossus Mark I began operating on 5 February 1944, and was succeeded in June of that year by the Mark II.

The deciphered messages provided the Allies with crucial intelligence on what enemy armed forces were plotting. The allies knew for example that Hitler had swallowed the bait that the D-Day landings in June 1944 would be at Calais rather than Normandy. This gave the Allies a decisive advantage.