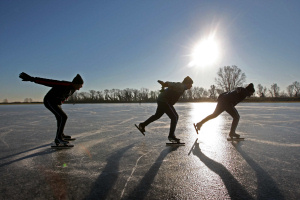 Skaters have been flocking to the frozen Cambridgeshire Fenlands after the cold snap provided a rare opportunity to enjoy the ancient sport during the festive season.

It is the first time in nearly 20 YEARS that the flooded Fen fields have frozen over at Christmas and only the FOURTH time in half a century.

The shallow waters of the Welney Wash in the heart of the Fens on the border between Cambridgeshire and Norfolk have been turned into an enormous natural ice rink. It has become a skater’s paradise, several hundred times larger than an indoor ice rink, with 21 miles of frozen fields.

"It’s one of the last great British sub cultures and very few people realise than just an hour or so from London there is this great track of natural ice," said Adam Giles, of the Welney and District Skating Club.

"It’s lovely to be able to skate at Christmas and it looks like a real picture postcard Christmas here in the Fens."

The Cambridgeshire Fens were the birthplace of British speed skating and when farm hands were unable to work on the frozen land they welcomed the chance to skate for prizes.

People wore "fen runners", made by setting blades with curved fronts into blocks of wood, which were screwed into the soles of everyday boots.

It takes three nights of temperatures of minus six or below to form ice strong enough to skate on.

Just where in the Fens it's possible to skate varies from year to year, and depends on where the farmers and river authorities have allowed the land to flood.

"It’s fantastic, its the first time we have had skating at Christmas here for nearly 20 years,"said Roger Giles, 70, of the Welney and District Skating Club.

"The ice is ideal for fun skating but we need a longer cold spell for competitions."

If the low temperatures continue skaters hope the British and Fenland Skating Championships would be able to take place for the first time in more than a DECADE.

The first properly organised skating race was held in the Fens in 1814 and during the harsh Victorian winters people travelled from America and the Continet to compete for a leg of mutton or a bag of flour.

Competitions became rarer during the last century as winters gradually got milder and the last day’s racing was in 1997.

Most of the Fen skaters are now in their 70s and 80s and remember a time when the sport was a part of everyday life.

In the 1940s many skated every year and every family in the Fens had a pair of skates.

Philip Doubleday, 80, said: "I have been skating since I was four and it is wonderful.

"I’m looking forward to skating again this year and always enjoy it.

"It is a chance to renew friendships and meet people you haven’t seen for several years since the last skating.

"It is always exhilerating to skate outdoors in the fresh air."