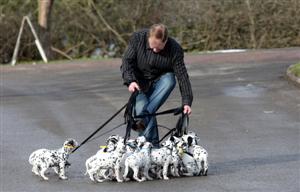 This is what it’s like taking 18 playful dalmatian pups for a walk.

The world record-breaking litter gave owner Adam Morley a ruff time when he took them for a play in the park.

The spotty siblings, now 11 weeks old, left him all tied up as they enjoyed a bit of rough and tumble before heading to their new homes.

“It was a nightmare, I may as well have been walking 101 Dalmatians,” said Mr Morley.

“Most of the dogs wanted to walk in different directions, while some of them just sat down and wouldn’t budge.

“I got in a terrible tangle. It was like being in the middle of a spotty blizzard.”

The yappy family has now been split up and the mischievous mutts are settling in with their new owners all over the country.

“We were really sorry to see them go. We do miss them and I cried when they left,” said Mrs Morley, 31.

“It was like handing over lots of babies because we hand-reared them for the first four weeks.

“It has been an amazing experience, but very tiring. The house seems really quiet now.”

Button, whose father was in the film 102 Dalmatians, broke the world record in December when she gave birth to her brood of 18, just a year after having a litter of 15 pups.

Her latest litter is believed to be the largest born to a dalmatian in the UK, with the average just eight or nine.

Each pooch weighed about 2lb and had to be fed on a 24-hour rota by the couple with help from their three sons.

“We’ve made sure they’ve had the best start in life,” said Mrs Morley.

“We took them for a thorough health check when they were 24 hours old and seven weeks old and they’ve all been properly weaned.

“They have all gone to loving family homes and we offer a contract stating that if there is any sort of problem they should be returned to us.

“We also ask that the puppies are never put in kennels but come and stay with us if their owners go away, so we’re bound to see them all again soon anyway.”

The couple also took the pups for a hearing test at the Animal Health Trust in Newmarket, Suffolk, when they were six weeks old and were amazed that all but one passed.

“We were told that just one of the pups was deaf in one ear, but it’s a great result as dalmatians are genetically prone to deafness,” said Mrs Morley.

“It’s extremely important to have the test if you want to breed. In this country I understand that just one in five dalmatians bred are hearing tested.

“If they all had a hearing test then I believe deafness could be eradicated.”

Julia Freeman, a neurology technician who spent four hours testing the puppies, added: “Dalmatians do have a genetic predisposition to deafness, so it's quite common to see litters of little spotty dogs in our hearing clinic.

“We have found that one in five dalmatians is completely deaf in one or both ears, but just one single puppy of Button's 18 turned out to have hearing in only one ear - all the others were fine, which is a fantastic result!

“Congenital deafness can be a problem for any dog with a predominantly white coat, and we strongly advise breeders to get puppies, especially from those ‘at risk’ breeds such as the dalmatian, properly tested before they go off to their new homes"