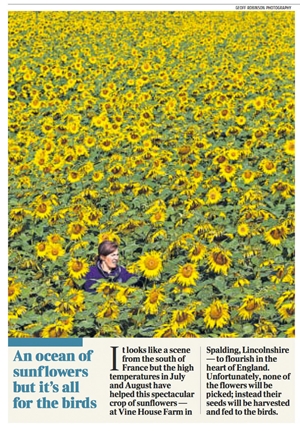 The sunny summer weather has helped produce a bumper crop at Britain's biggest sunflower farm - but sadly all six million blooms will be fed to the birds.

It looks like a scene from the south of France but the high temperatures in July and August have helped this spectacular crop of sunflowers flourish in the heart of the UK.

The dry weather has provided perfect growing conditions for the 160 acres of plants at Vine House Farm in Spalding, Lincolnshire - one of the most northerly commercial sunflower farms in the world. But these spectacular sunflowers will not be picked, instead their six billion seeds will be harvested and fed to the birds.

"The sunflowers have really enjoyed the sunny summer weather like us and we are expecting a very good crop," said Lucy Watts, 35, manager of bird food at the 2,000 acre family-run farm. "They had a difficult start as we had a cold May and June and they flowered around 10 days later than usual, but they have since flourished in the sun. We have had lots of comments from people saying how spectacular they look in the fields."

Black sunflowers were first planted at the farm in 1998 and a new crop is grown every May. Once they have flowered they are left to ripen in the fields, then harvested when the heads turn brown in late September and October. They are then added to red millet, white millet, naked oats and canary seed, which are also grown on the farm, to create a bird food mix. It is sent by mail order to homes across the country. 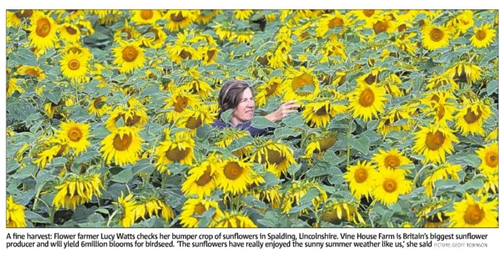 "Black sunflower seeds are bigger and favoured by garden birds," she added. "Our bird seed is becoming more and more popular each year as people want to do their bit for the environment and help feed the birds."

The farm, which offers walks around its sunflower fields, now sells around 1,500 tonnes of bird seed a year for around £80,000.