Model Is First To Dance With Tiger Sharks 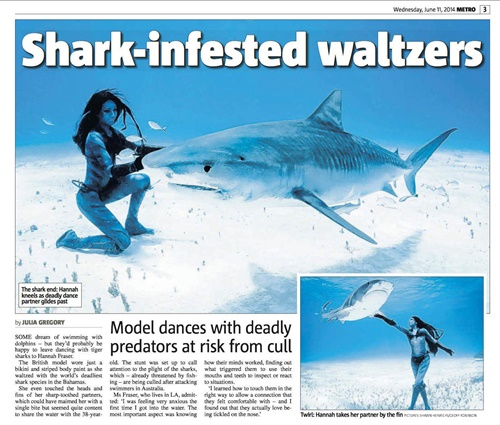 A female model has become the first person in the world to do a death-defying underwater dance with wild killer TIGER SHARKS.

Hannah Fraser held her breath and plunged 15 METRES below the Atlantic Ocean in the Bahamas to swim with a shoal of the world’s most dangerous shark species.

The 38-year-old, who wore a skimpy bikini and had NO diving equipment, had to keep moving to stop the 16-FOOT LONG sea creatures from eating her alive. Hannah, who was born in England but now lives in LA, said goodbye to her family in case she did not return from the ultimate dangerous feat. The model undertook the dangerous swim without a mask and fins, to oppose the culling of tiger sharks, which are a threatened species due to finning and fishing by humans.

Amazing footage, shot by Emmy award-winning cinematographer, Shawn Heinrichs, shows Hannah dancing on the bottom of the seabed with the sharks swimming around her. Hannah, who can hold her breath for up to two minutes and swim to depths of 45 feet, is even seen resting her hand on the head of a huge tiger shark and touching their tails and fins. The massive marine mammals appear oblivious to her presence as she dances and twirls on the bottom of the ocean.

She said: "I was feeling very anxious the first time I got in the water with the tiger sharks. The most important aspect was knowing how their minds worked, finding out what triggered them to use their mouths and teeth to inspect or react to situations and how to avoid doing any of those actions or movements. We avoided wearing anything light coloured because that may catch their eye and look like a little fish, causing them to bite by accident. I learned how to touch them in the right way to allow a connection that they felt comfortable with, and amazingly enough, I found out that they actually love being tickled on the nose."

Photographer Shawn said: "What made this shoot entirely unique was that Hannah was devoid of any scuba or free-dive gear, dressed only in a tiny costume and airbrush body paint to create the perfect artistic vision. Without mask, fins or any sort of protective gear, she had to rely solely on her skills, training and experience, along with the diligent support of her expert team, to ensure the shoot went off without a hitch. There was no room for error, as one mistake could have resulted in severe injury or worse. Despite the risks, the team was resolute in their mission to create the most ground-breaking imagery to oppose not only the Australia shark cull, but also the global slaughter of sharks."

Hannah added: "Many people have asked me why I would put my life on the line to do this, especially for dangerous predatory sharks. I feel that all animals play an essential role in keeping our ocean ecosystems in balance. We humans have a history of annihilating anything we see as a competition, so much so that we are now threatening our very existence on this planet. I advocate for greater understanding and awareness for all sea creatures, and hope to inspire people to see that sharks, despite being one of the world's most effective predators, are also intelligent, and magnificent animals worthy of protection. We are currently killing over 100 million sharks per year, whereas there are only five reported human fatalities by sharks per year worldwide. Who are the real dangerous predators in this equation?"

Tiger sharks can grow up to 16ft long and are found in tropical waters. They are nocturnal hunters and eat fish, seals, bird and turtles. They are captured and killed for their fins, flesh and liver. Over 100 million sharks are killed by humans every year. There are around 15 shark fatalities to humans globally around the world each year.