British Birdwatcher Finds All 32 of Planet’s Most Secretive Birds 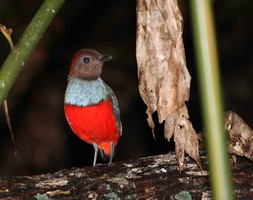 A British birdwatcher has become the first in the WORLD to successfully find all 32 species of the planet’s most SECRETIVE birds in just 12 months.

Chris Gooddie has stunned birdwatchers by tracking down every species of the rare and elusive rainforest bird, the Pitta, in a year.

Chris Gooddie has stunned birdwatchers by tracking down every species of the rare and elusive rainforest bird, the Pitta, in a year.

The 46-year-old took more than 75 flights across the globe and spent an amazing 2700 HOURS searching for the Pittas, many of which are endangered or even on the verge of extinction.

He travelled a remarkable 210,000 KILOMETRES around the world by air, truck, motorbike, taxi, canoe and motorboat to track down the beautiful birds, which are known as Jewel Thrushes in parts of Asia.

Chris, who spent £30,000 hunting for the brightly-coloured birds, had to trek through miles of dense forest and sleep for days in makeshift camps to see the species, many of which have rarely been seen before.

“Until now only one other person in the world as seen all 32 species of Pitta as far as I know, and it has taken him a lifetime,” said Chris.

“When I told other birdwatchers what I was planning to do they thought I was crazy.

“I’m absolutely thrilled to have seen all the species and never dreamed it was possible, especially in such a short space of time.

“Pittas are very secretive and very little is known about some of the species. Some of them are migratory and no one knows where one or two species even spend the winter.”

Chris, who became fascinated with birdwatching when he was 12, left his £90,000 a year sales director job in London to pursue his dream of finding every species of Pitta. Pitta are strongly territorial and live in the rainforests of South East Asia, India, Australia and Africa. They are often found in darker areas of the woodland, which makes them difficult to spot. A number of species are migratory, many are endangered, and a few species, such as Gurney's Pitta, which is only found on one site in Southern Thailand and one site in Tenasserim, Southern Myanmar, are on the verge of extinction.

“The birds tend to hop around on the forest floor but most of the species are very shy and hard to find,” said Chris.

“Often the only way to find them is to record them calling, then play it back to them, then they approach as they think you are a potential rival.

“It works best when they are at their most territorial so for each species there is a particular time of year when they are easier to find and I had to work that out when I was planning my route.”

Chris allowed himself between five and 12 days to spot each species of bird, with his search for one species sometimes spanning several countries. One of the hardest to find was the Green-breasted Pitta, which until 2009 no one had ever heard before. The Black-faced Pitta was another challenge as it is only found on Santa Isabel in the Solomon Islands.

“They are perhaps the most elusive of all. Easy to hear, but almost impossible to see,” said Chris, who managed the first photo of the species ever taken in the wild.

Giant Pitta, which is found in Thailand, Malaysia and North Borneo, was also tough.

“I had spent the last 15 years trying to see one of these on holidays and business trips so I didn’t hold out much hope,” said Chris, from London.

“But I got lucky in North East Borneo while I was staying in a river lodge as someone mentioned they had heard one calling further up the river.

“We immediately got in the boat and amazingly I managed to find both a male and female. I was ecstatic and it was a huge weight off my mind.”

The Rusty-naped Pitta also proved particularly difficult to find, with Chris searching in both Thailand and Malaysia.

“I spent five days in North Thailand in pursuit of the bird, but after six and a half days I eventually saw it at Fraser’s Hill in Malaysia,” he said. “It was such a relief.”

Throughout his year-long adventure Chris almost stepped on a venomous Wagler’s Pit Viper in North Indonesia, was chased down a narrow track by an Asian Sun Bear, ran out of petrol in a small boat in the Pacific and suffered bad dysentery in Bali.

“It was tough and a huge effort, but really worth it,” added Chris, who is married to Maxine.

He has now written a book about his highly unusual record, The Jewel Hunter, which is published by WildGuides, with profits from the publishers going to BirdLife International. Rob Still, publishing director of WildGuides said “Being a birdwatcher myself I am sure I speak for all of us in describing the slightly begrudging envy yet jaw-dropping respect for what Chris has achieved.

“These birds are unbelievably hard to find and are the most sought-after prize for many, so it is with both the utmost pride and enthusiasm that we have published this book.

Pittas, which have the scientific name Pittidae, are between 15 and 25cm long and have brightly-coloured plumage. They like wet forest floors and feast on snails, earthworms and insects. They lay up to six eggs in a large spherical nest in a tree or shrub or sometimes on the ground. Eight species are vulnerable and the main threat is habitat loss due to deforestation. The Gurney’s Pitta was not seen for 34 years between 1952 and 1986, before a small population was discovered in southern Thailand.