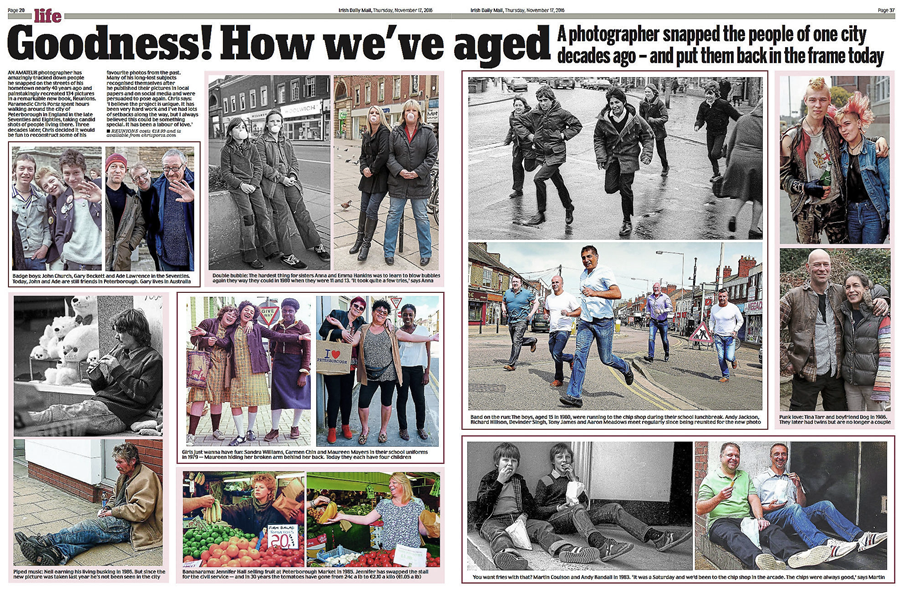 An amateur photographer has amazingly tracked down people he snapped on the streets of his hometown almost 40 YEARS ago and painstakingly recreated 134 PICTURES in a remarkable new book.

Paramedic Chris Porsz spent hours walking around the city of Peterborough, Cambridgeshire in the late 1970s and 80s, taking candid shots of punks and policemen, siblings and sweethearts, traders and teenagers. Three decades later, Chris, known as the “paramedic paparazzo,” decided it would be fun to reconstruct a handful of his favourite photos from the past. 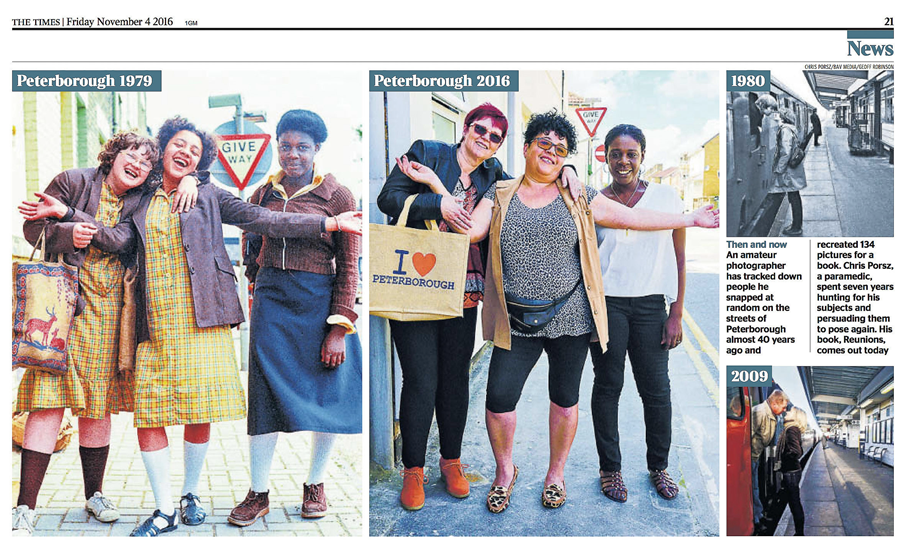 Incredibly some of his long-lost subjects recognised themselves after he published their pictures in local and national papers, on his website and on Facebook. The reconstructions were such a success he was determined to do more and has spent the last SEVEN YEARS tracking down the people in his pictures and persuading them to pose once again. His hard work paid off and he has now published his photos in a new book, “Reunions,” which comes out tomorrow (Fri Nov 4) and is believed to be the only one of its kind in the world.

“This book has been nearly 40 years in the making and I believe the project is totally unique. I don’t think anyone else has tracked down so many strangers and recreated photos in this way before,” said Chris. “It has been very hard work and I’ve had lots of setbacks along the way, but I always believed this could be something really special and was determined to do at least 100 reunion pictures and it has been a labour of love.”

Chris caught the photography bug after buying a camera when his first child Simon was born in 1978. Soon family photos were not enough for him and on his days off, Chris, who was working as a casualty porter at Peterborough District Hospital, started walking the streets for inspiration. He took pictures of punks with colourful hair, siblings playing in the streets, shopkeepers selling their wares and even policemen carrying out their duties. Chris, who often only had one chance of getting a particular picture, would develop his photos in a dark room at home and put the best ones in an album. 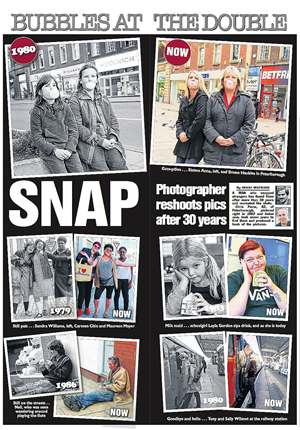 “I would often be drawn by certain expressions on people’s faces, or a fleeting moment. It became quite addictive,” said Chris. “I liked taking photos of people who stood out from the crowd, things which were a bit different, quirky or fun.”

But by 1986 Chris had got a new job as a paramedic and with three children life was busy and he had less time to devote to his hobby and his albums started to gather dust. Then in 2009 he came across his old pictures and sent some to his local paper, The Peterborough Evening Telegraph. The readers loved them and soon he was getting letters from readers who recognised themselves in the photos.

“I had never taken anyone’s phone numbers or names and never expected to see any of the people in my pictures again, I just took them at random,” said Chris. “Then I realised it would be fun to recreate some of the pictures and I became determined to find more people.”

His first reunion was Tony and Sally Wilmot, a couple who Chris photographed saying goodbye at Peterborough Railway Station in 1980 and who are on the cover of the new book. The pair, who had no idea their picture had been taken, went on to get married and have two children. They got in touch with Chris after Tony’s father spotted the picture in the local paper. After that Chris became a man on a mission and used every means possible to track people down. On one occasion he found Ricky Clarke, a man he had photographed in a derelict house, after responding to a 999 call.

Chris said: “Ricky rang 999 as he was unwell and as a paramedic I was called to his home. Whilst treating him he said that I had taken his picture 30 years ago. I couldn’t believe it, it was a million to one chance. The first 50 photos took around four years to do, but social media made it easier and soon I was struggling to keep up, sometimes doing 10 reunions a week.”

“It has been enormously satisfying to do so many reunions and seeing the smiles on people’s faces as they met up with old friends again. I’ve felt very privileged,” said Chris.