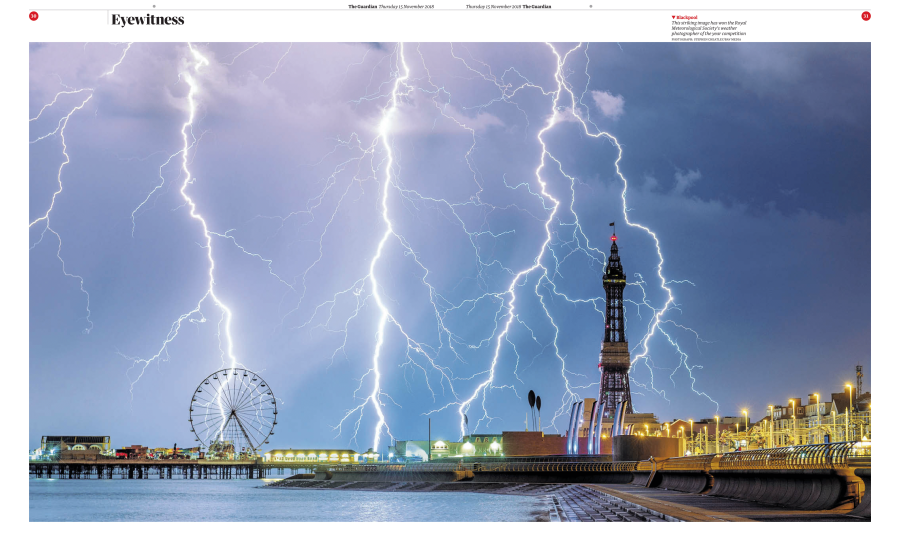 A picture of LIGHTNING striking in Blackpool has come top in the annual Weather Photographer of the Year competition.

The photo entitled, Electric Blackpool, taken by Stephen Cheatley, beat more than 4,000 pictures in the contest, which show weather phenomena around the world. Other pictures show a double rainbow over the Grand Canyon, a late season dust storm in Arizona and a spectacular reflection bow in the Lofoten Islands in Norway.

The competition was organised by The Royal Meteorological Society (RMetS) in association with AccuWeather.

Trish Mikita, Vice President of Accuweather, said: “It was an honour to be a selector in this year’s competition and to see the images that people from around the world submitted, representing their unique observations and perceptions of weather. The best photographs can so vividly capture both the grand majesty of weather events and their profound impact on our lives.”

An amazing picture of a stormy cloud formation in South Kansas, which reminded the photographer of the mammoth character in the movie Ice Age and was taken by Kathryn Parent, came top in the public vote.

Third prize in the 17 and over category went to Neil Barr for his photo, Getting’ the Messages, showing a blizzard bringing traffic to a standstill in the Scottish town of Greenock.

Nikolay Schegolev came second in the 17 and over category for his photo, Two times one train station, showing a foggy station.

First place in the category went to Dan Matthewman for his snowy picture, Descending the Arete du Midi in Fog at Sunrise.

A tornado tearing through the cornfields in Iowa in America is the subject of a picture by Martin Lisius.

Whilst another photo shows an incredible orange double rainbow over Barcelona and was taken by Carlos Castillejo. He said: “That March afternoon a storm with numerous lightning passed through Barcelona. It was a very fast spring storm that moved from west to east and died in the sea. A beautiful double rainbow appeared while the sun disappeared over the horizon. The light of the sunset was fantastic and that double rainbow, almost perfect, settled on the city of Barcelona. It was the rainbow that closed the storms.”

The Weather Photographer of the Year exhibition will go on tour around the UK early next year.