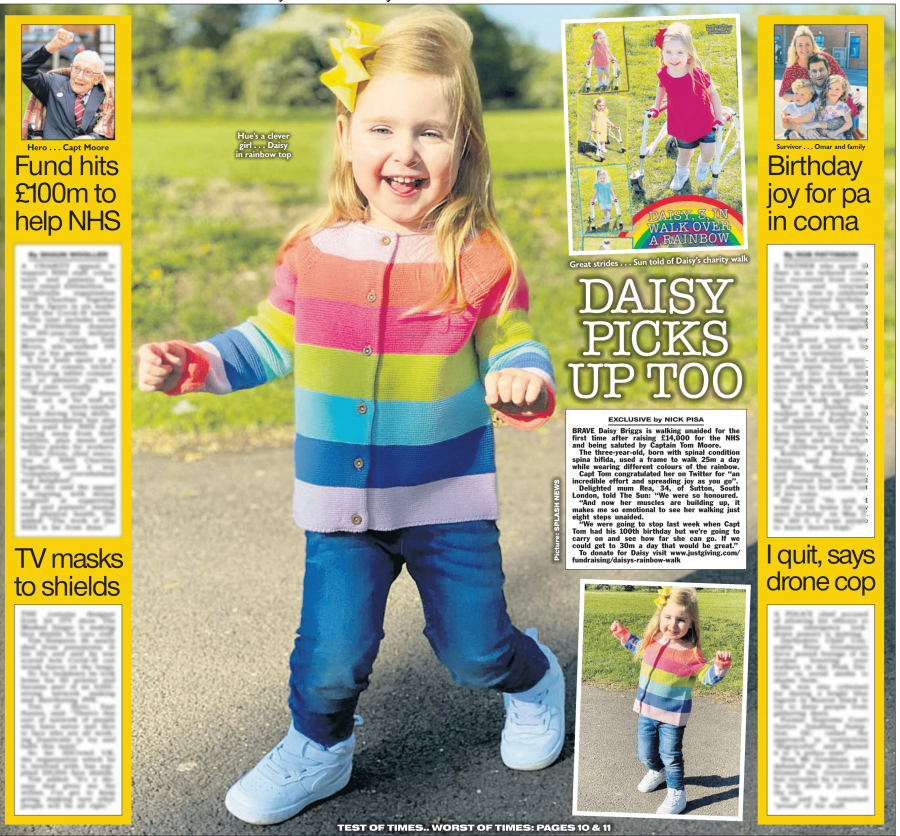 A three-year-old disabled girl told she may never walk has stunned her parents by taking her first steps UNAIDED – as she continues her rainbow mission for the NHS.

The Sun told how Daisy Briggs, who was diagnosed with severe Spina Bifida, a spinal condition, and Hydrocephalus, a build-up of fluid in her brain, had been inspired by Colonel Tom Moore to do a sponsored rainbow walk with her frame. Readers have helped the incredible little girl raise more than £14,000 for the NHS and now her proud parents are celebrating again after Daisy walked on her own for the first time.

“It’s absolutely incredible and the icing on the cake,” said mum Rea Briggs, 34, from Sutton in South London. “The last week has been a complete whirlwind. We are so proud of Daisy for her fundraising and would like to thank everyone who has made a donation. Just when we thought things couldn’t get any better she surprised us out of the blue by taking her first steps. I was on the phone to my mum and suddenly Daisy got up and walked six steps all on her own. I couldn’t believe it.”

Daisy, who was also born with talipes, a club foot, caught suspected meningitis when she was a few days old and has since had four brain surgeries, then stunned her parents by walking nine steps in the park the following day.

Rea said: “We were absolutely gobsmacked. She looked like such a natural and was quite steady on her feet. We’ve told her doctors and they thought it was incredible and have told us to keep going.”

Doctors originally gave Rea the option to terminate her pregnancy after being told Daisy would probably be in a vegetative state when she was born and her chances of walking were almost impossible. She had an operation to close her back at St George’s Hospital when she was just 17 hours old. She then caught suspected meningitis a few days later and she was on antibiotics for three weeks. Doctors noticed her head circumference was getting bigger and at four weeks old she had a shunt fitted to drain away the fluid from her brain, caused by her Hydrocephalus. Daisy was finally allowed home from hospital when she was five weeks old.

“Amazingly she sat up within the normal time frame and her crawling was only slightly delayed, then when she was two and a half she started walking with a frame,” said Rea. “She has gradually been building up her muscles and she can now walk 25 metres with her frame at any one time.”

Her parents now hope that with practice she will be able to make longer walks unaided and eventually become less reliant on her frame. Daisy had aimed to walk 25 metres a day with her frame wearing brightly coloured clothes to raise £100 before war veteran, Colonel Tom’s 100th birthday on April 30. But she has now decided to continue her rainbow mission throughout lockdown.