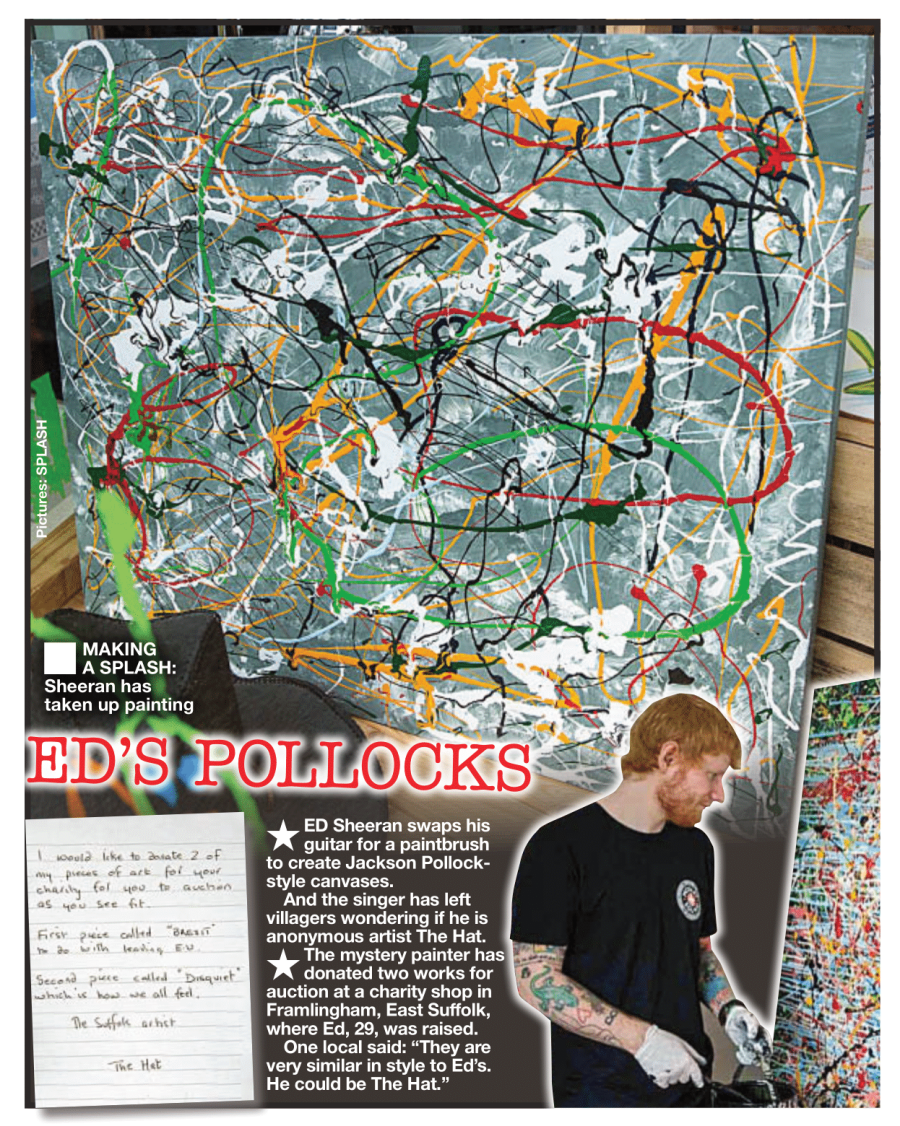 No one knows who The Hat is, but there is speculation it could be Sheeran, who has posted pictures on social media of similar murals, which he has painted during his break from touring.

There are rumours ED SHEERAN could be the new mystery “Banksy” artist who has been leaving his paintings at locations in East Suffolk asking for them to be auctioned for charities. The mysterious artist, known as “The Hat” has donated two of his Jackson Pollok-inspired paintings to a charity shop in Framlingham, where the pop star frequently makes donations.

Other pictures have been given to pubs, restaurants and food banks near to where the Shape of You singer lives. Last Autumn, the singer uploaded a photo of two of his canvases to his Instagram page and locals have now pointed out the similarity between them and the pictures done by The Hat.

One resident said: “The paintings have been appearing around East Suffolk and they are very similar in style to Ed Sheeran’s. There’s a rumour going around that he could be The Hat and if so these paintings could be worth a lot of money.”

Canvases have also been donated to the Oyster pub in Butley, Waveney Foodbank and Banham Zoo. On his website, The Hat says he is a man in his 60s who only recently discovered “a love and talent” for art, having been a carpenter most of his working life. He says in “just a few months” he has “created and sold a number of pieces for several hundred pounds each.”

He adds: “In response to the current situation, a selection of pieces have been donated to local charities, keep an eye out for auctions raising money for The NHS, Banham Zoo, EACH, Home-Start and many more. A special piece has been sent to TV presenter, Bill Turnbull, to help support Prostate cancer charities.”

Many believe The Hat’s background could be invented and the artist is really Sheeran, who is known for his local charity work.

In his Instagram post about his paintings last year he wrote: “Spent an entire month since tour ended painting, which I’ve never done before. Had so much fun doing it. If I’m honest I felt a bit useless once tour had ended, coz singing, writing and gigging is all I’ve ever known, so it’s nice to find a new way to be creative. I’d recommend anyone getting a few paints and having a splash around, it’s so fun. Righto - back to hibernation x.”

Ed’s mum Imogen and dad John ran an art consultancy for two decades, so art runs in his family.