A Bridge Too Dear 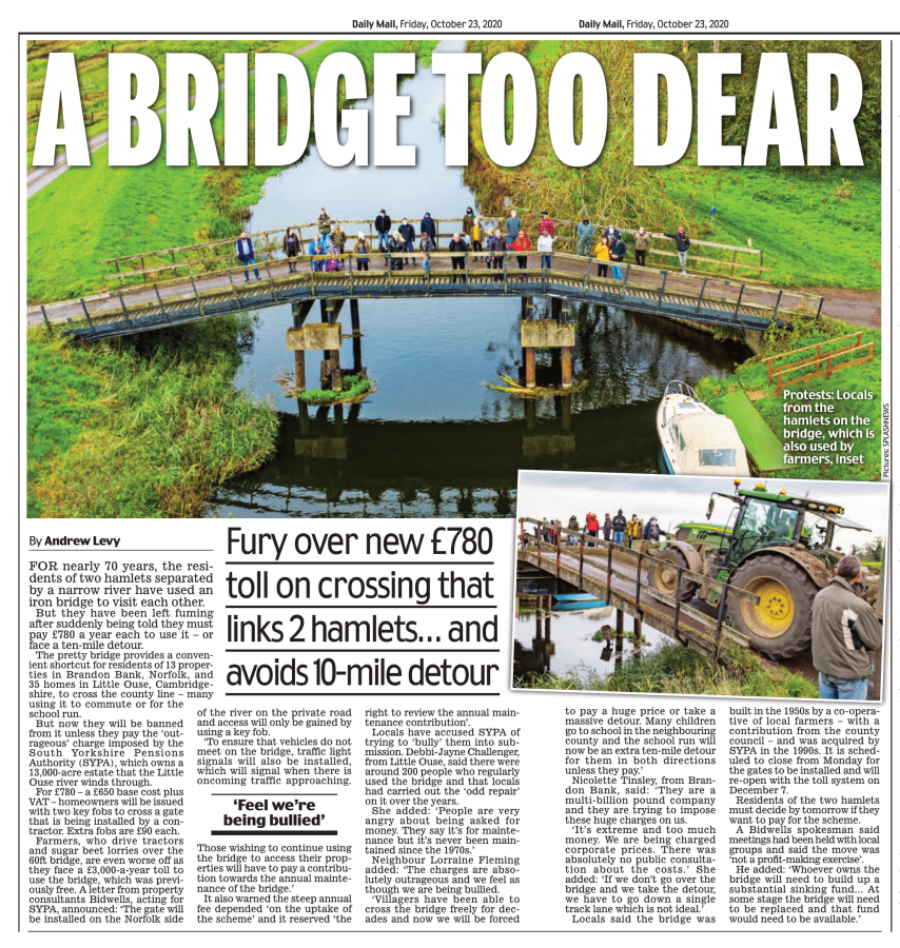 Furious villagers on the Cambridgeshire and Norfolk border have been told they must pay at least £780 a year to continue using an historic iron bridge – or face a 10 MILE detour.

Residents in the small community of Brandon Bank and Little Ouse were stunned to receive a letter telling them they must now pay a significant toll to cross the bridge – which has been free to use for more than 70 YEARS. The charges have been imposed by the South Yorkshire Pensions Authority, which owns the bridge - which was built in the 1950s - as part of the 13,000-acre Waldersey estate.

The bridge allows residents to quickly cross from the hamlet of Brandon Bank in Norfolk, which has 13 properties, to the village of Little Ouse in Cambs, which has 35 properties, and vice versa, with many going to school and work in the neighbouring counties. But South Yorkshire is now planning to install a cantilever gate across the road leading to the bridge, which can only be accessed by a key fob - given to residents who have paid the annual maintenance charge.

A letter sent to residents by Bidwells, who are acting on behalf of South Yorkshire, states: “We wanted to make you aware that the Authority have instructed a local contractor to install an automatic cantilever gate, the gate will be installed on the Norfolk side of the river on the private road, and access will only be gained by using a key fob. To ensure that vehicles do not meet on the bridge, traffic light signals will also be installed, which will signal when there is oncoming traffic approaching. Those wishing to continue using the bridge to access their properties will have to pay a contribution towards the annual maintenance of the bridge.” The letter continues: “Those who are legally allowed, or have paid an annual fee, will be able to use the bridge and gain access via the gate.”

It said they were currently “Calculating the budget for the annual maintenance of the bridge” and expected the annual cost for residential users over 20 YEARS to be £650 plus VAT per year. But they said this figure may alter “depending on the take up of the scheme” and they reserved “the right to review the annual maintenance contribution.” They said that those who pay will be given two key fobs, but extra key fobs will cost £75 plus VAT each. The bridge is also used by local farmers, who are being asked to pay £3,000 a year to continue using it.

The sudden decision to impose the charge has surprised and angered many villagers who say they are being “bullied” by South Yorkshire.

Lorraine Fleming, who lives in Little Ouse, said: “The charges are absolutely outrageous and we feel as though we are being bullied. Villagers have been able to cross the bridge freely for decades and now we will be forced to pay a huge price or make a massive detour. Many children go to school in the neighbouring county and the school run will now be an extra 10-mile detour for them in both directions unless they pay.”

Nicolette Tinsley, from Brandon Bank, said: “They are a multi-billion pound company and they are trying to impose these huge charges on us. It’s too extreme and too much money, we are being charged corporate prices. There was also no public consultation about the costs. If we don’t go over the bridge and we take the detour, we have to go down a single-track lane which is not ideal.”