A paramedic has spent more than 40 YEARS photographing the changing face of the NHS - and published his pictures in a new book.

Amateur photographer Chris Porsz, 67, spent many of his day’s off over the last four decades accompanying colleagues to capture the patient’s journey from the 999 call to the hospital. He has taken hundreds of pictures of doctors, nurses, patients and wards at three hospitals in Peterborough, Cambridgeshire and now produced a book, 'Just Be Kind', with part proceeds going to Breast Cancer Research.

Chris took dozens of photos over the years, whilst working as a porter and later a paramedic, and his pictures offer a unique behind-the-scenes view of the NHS from the 1980s, with nurses neatly dressed in blue gingham and frilly hats, to the present with masked doctors dealing with the coronavirus pandemic. His collection of more than 350 candid photos show how the NHS has gone through incredible changes, with advances in medicine and technology, but that the camaraderie has remained the same, with staff comforting patients and each other as they tackle everyday emergencies.

“Head staff at the hospital knew I enjoyed photography so invited me to document what goes on behind the scenes over the years,” said Chris, who initially worked as a porter and later as a paramedic at Peterborough District Hospital in Cambridgeshire. “There have been huge changes in the NHS during the decades and it’s fascinating to look back at the pictures now and see how different it used to be.”

Chris’ pictures from the 1980s show off-duty nurses drinking alcohol and smoking in a social club and radiographers processing film x-rays, rather than digital images which we have today. Other early photos show smiling hospital cleaners hard at work, neatly-dressed nurses and medics cuddling patients. Staff are seen protesting against low pay in 1982 and ambulance staff are pictured during the pay dispute of 1989. In later pictures nurses are seen wearing tunics and trousers, staff are seen operating with the latest equipment and crowds gather outside the hospital to clap for the NHS during the coronavirus lockdown. 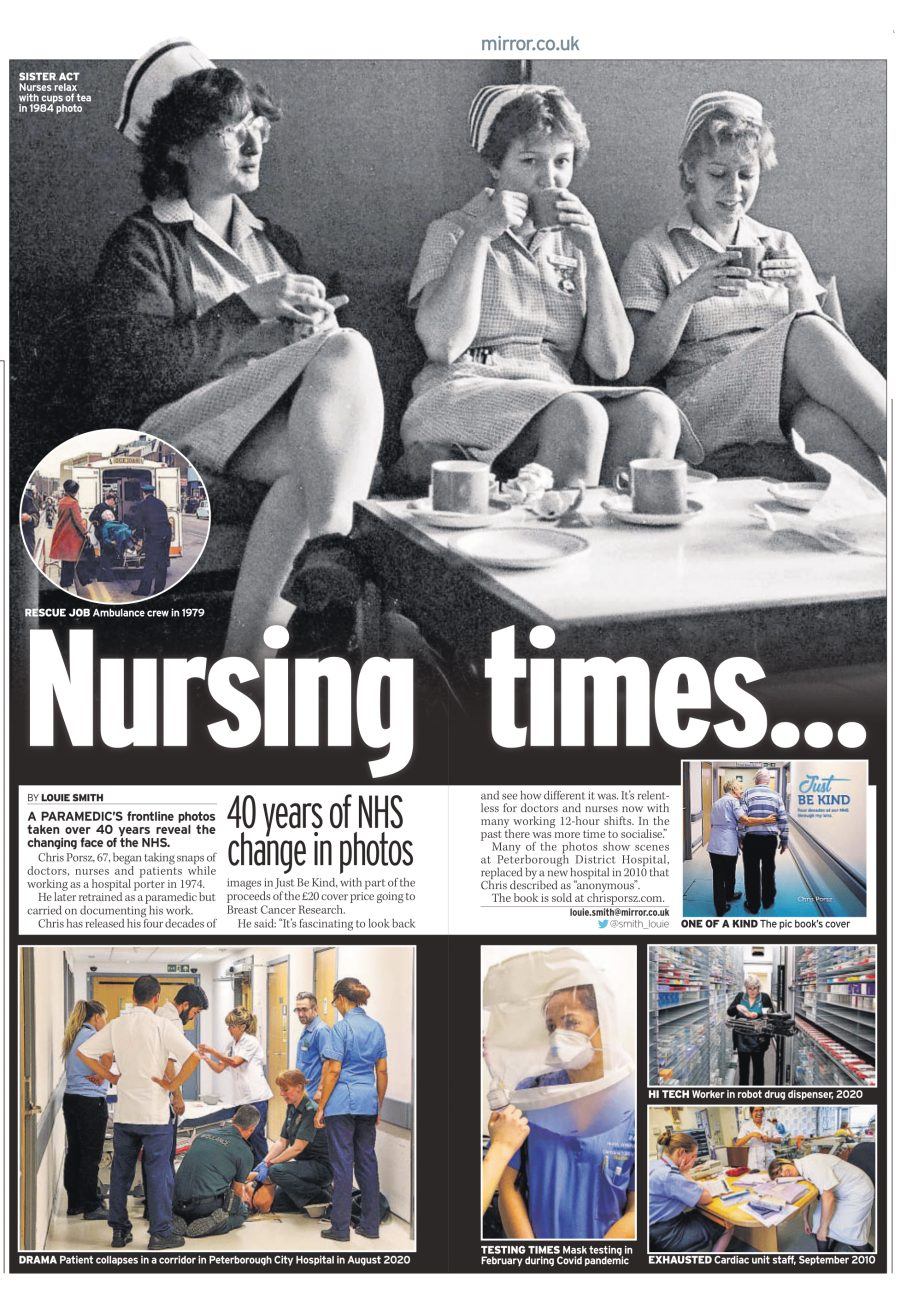 Chris, who became a porter in 1974 and a paramedic in 1988 said that some of the biggest changes have been in the A&E department, where victims of car crashes were very common in the 1980s.

He said: “In the past, before seat belt laws were introduced, and helmets for motorcyclists, the trauma was horrendous. I remember going along a line of six victims on trolleys with a bucket and sponge to wipe the blood away so that the nurses and doctors could see the wounds. They would then spend hours picking out the glass and suturing. A&E staff would consist of a doctor, sister, staff nurse, auxiliary nurse, cleaner and radiographer, who was on call if needed. The doctor would go to bed when it got quieter and a consultant called in from home if needed. Staff are non-stop and more stressed now trying to keep up with the demand. It’s rare to see such carnage now, but the A&E department is busier than ever as fortunately people are living longer with better treatments but with complex needs and conditions or increasingly elderly population.”

Chris said new technology had also changed the way the hospital operated, with CT and MRI scans now available, as well as digital x-rays. “In the past one radiographer would deal with half a dozen road traffic victims and have to process the film, before they could see the injuries. Now it is digital and x-ray results are instant,” he added. “All these things make a huge difference.”

Peterborough District Hospital was built in continuous phases between 1960 and 1968 and was closed in 2010, then re-built on a different site as Peterborough City Hospital. Photos in the book show the original hospital being demolished and later rebuilt.

“We all have very fond memories of the old hospital. It was a bit like a village and a lot smaller so you quickly got to know everyone and we all had a lot of time for each other,” said Chris. “Now the hospital is quite anonymous, with big long corridors and everyone keeps to their own wards and offices, so it’s a very different atmosphere. It’s quite relentless for doctors and nurses now, with many working 12-hour shifts, but in the past there was more time to socialise.”