The UK’s first electric forecourt has opened – with the ability to charge cars in just 20 minutes.

The site in Braintree, Essex, is the first of around 100 electric forecourts to be built around the country over the next five years as part of a £1 billion programme. It was due to open in November but was delayed due to the coronavirus pandemic and the second national lockdown.

The first forecourt has been constructed on a two-and-a-half- acre site adjacent to Great Notley, just off the A131, and has links to Stansted Airport, Chelmsford, Colchester and the M11. It enables 36 electric vehicles to be charged simultaneously, with high power chargers that can deliver up to 350kW of charging power, enabling people to add 200 miles of range in just 20 minutes. 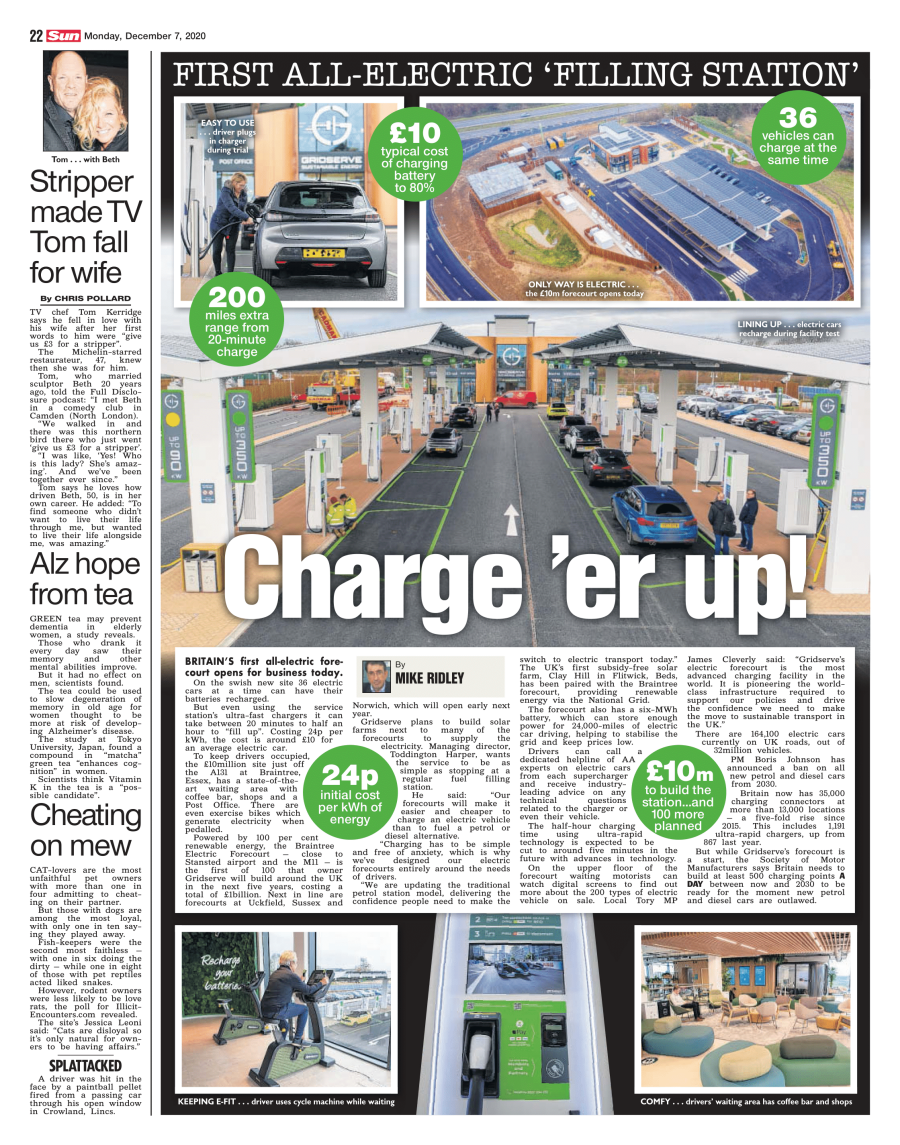 The company behind the project, Gridserve, says it wants to make electric vehicle charging as easy as using petrol stations and is building electric forecourts on busy routes. It is supporting the Government’s commitment to ban the sale of new petrol, diesel and hybrid vehicles within 15 years and aims to have a UK-wide network operational within five years.

Toddington Harper, founder and CEO of Gridserve, said: “Today’s announcement represents a major milestone in achieving Gridserve’s purpose to deliver sustainable energy and move the needle on climate change. It’s our collective responsibility to prevent greenhouse gas emissions rising further, and electric vehicles powered by clean energy represent a large part of the solution. However, charging has to be simple and free of anxiety, which is why we’ve designed our Electric Forecourts ® entirely around the needs of drivers, updating the traditional petrol station model for a net-zero carbon world and delivering the confidence people need to make the switch to electric transport today – a full decade ahead of the 2030 ban on petrol and diesel cars. Together with our charging-included electric vehicle leasing business, that we are also launching today in partnership with Hitachi Capital (UK) PLC, people now have the full confidence to make the transition to an electric vehicle, knowing that charging is in-hand, and it’s actually less expensive to use an electric car than a petrol or diesel alternative.”

James Cleverly, Minister of State, former Conservative Party Chairman and MP for Braintree, added: “Our government is committed to increasing the take-up of electric vehicles, to clean our air and enable us to achieve net zero carbon emissions as quickly as possible, which is why we have just brought forward the ban on new petrol or diesel to 2030. “Gridserve’s Electric Forecourt ®, close to Braintree, is the most advanced charging facility in the world and is pioneering the world-class infrastructure required to support our policies and drive the confidence we need to make the move to sustainable transport in the UK.”

The new network of electric forecourts will be powered by solar energy and battery storage and Gridserve plans to build solar farms next to many of their planned forecourts to supply the electricity. The UK’s first subsidy-free solar farm in Clay Hill has been paired with the Braintree Electric Forecourt ®, providing 100 per cent renewable energy via the National Grid. There is also a 6 MWh battery onsite which helps to balance the local energy grid and shift energy to periods when it is more valuable. For example, on windy winter nights the battery can store enough energy to drive 24,000 miles in electric vehicles the following day, helping to maximise the value of renewable energy resources, stabilise the grid, and keep prices low. Drivers charging at the forecourt will initially pay just 24p per kWh of energy (including VAT), which is currently the lowest ultra-high power charging rates on the market today – meaning a typical charge from 20 per cent to 80 per cent costs under £10 for an average-size electric vehicle on the market today.

While vehicles charge, drivers can relax and shop in a state-of-the-art facility with a waiting lounge, free superfast Wi-Fi, a kid’s area and business meeting room pods. There is also a retail space with a coffee shop and supermarket. Customer support is provided by the AA via a dedicated team of electric vehicle experts. Drivers can call a dedicated helpline from each supercharger and receive industry-leading advice on any technical questions related to the charger or even their vehicle.