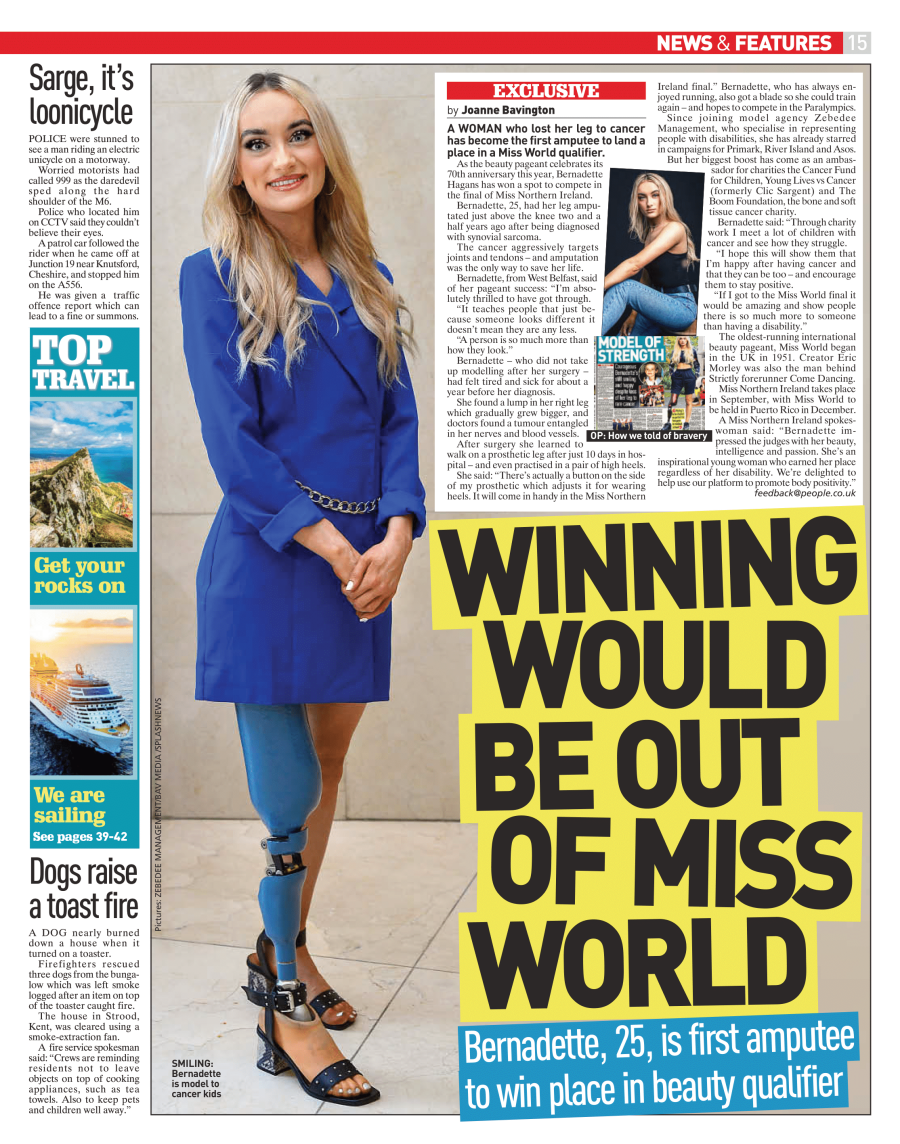 A woman who lost her leg to cancer has become the first amputee to compete in a Miss World qualifier – as the famous beauty pageant celebrates its 70th anniversary this year.

Blonde beauty Bernadette Hagans who had her leg amputated just above the knee two-and-a-half years ago to save her life, has remarkably won a place in the final of Miss Northern Ireland. The 25-year-old had the life-changing surgery following a diagnosis of synovial sarcoma - an aggressive cancer which targets joints and tendons.She has now become the first amputee in the world to take part in a qualifier for the oldest-running beauty pageant, which was started in 1951.

Bernadette, from West Belfast, said: “I’m absolutely thrilled to have got through to the Miss Northern Ireland final as it teaches people that just because someone looks different it doesn’t mean that they are any less. A person is so much more than how they look.”

Bernadette felt tired and sick for about a year before she was diagnosed with cancer. She found a lump in her right leg which gradually got bigger and was sent for a scan. Medics discovered she had a cancerous tumour which was entangled in her nerves and blood vessels and told her they would have to amputate through her knee to save her life. Amazingly Bernadette learnt to walk on a prosthetic leg after just 10 days in hospital and has been determined not to let her disability stop her from doing anything. She even took a pair of high heels into the hospital to learn how to walk in them.

She added: “It can take people months to learn how to walk but I was out of the hospital in 10 days. It was tough as I had to learn how to use my knee joint again. I just wanted to be able to walk and run again as quickly as possible. There’s actually a button on the side of my prosthetic which adjusts it for wearing heels. It will come in handy in the Miss Northern Ireland final.”

Bernadette has always enjoyed running and also got a blade so she could start training again. She now hopes to be in the Paralympics in the future. She said: “Running makes me feel so free and it’s amazing how much you miss something once you can’t do it, so it’s wonderful to be running again.”

After losing her leg, Bernadette also joined modelling agency Zebedee Management a specialist talent agency representing individuals with disabilities and alternative appearances, and has since starred in a number of fashion campaigns, including Primark, River Island, Asos, Eastpak, Schwarzkopf, and Amazon Prime. She also became a model for footwear brand Kurt Geiger as part of its People Empowered campaign. When she isn’t modelling, Bernadette does lots of volunteering and has become an ambassador for Clic Sargent, the Cancer Fund for Children and the Boom Foundation, the bone and soft tissue cancer charity. She was invited by Miss Northern Ireland to take part in the competition and won a place in the final after a virtual heat via Zoom.

She said: “I’ve watched the Miss World competitions on television and feel so lucky to be in with a chance at competing. Miss Northern Ireland approached me and saw I was good enough to compete, with my modelling and charity work, so it was a lovely surprise. I’m already having a lot of fun taking part. I haven’t seen any other countries who have had contestants with a physical difference in their Miss World heats, so I think it’s brilliant that Northern Ireland is leading the way. Through my charity work I meet a lot of children with cancer, and I see how much they struggle. I hope this will show them that I am happy after having cancer and that they can be too and encourage them to stay positive. If I got to go to the Miss World final it would be amazing and show people there is so much more to someone than having a disability.”

Miss World is the oldest-running international beauty pageant and was created by Eric Morley in the UK in 1951 when he organised a bikini contest as part of the Festival of Britain. Today contestants have to demonstrate they are good all-round role models, by doing charity work and showing their sports skills, as well as modelling. The Miss Northern Ireland final will take place in September and the Miss World contest will be in December in Puerto Rico.

A spokeswoman for Miss Northern Ireland said: “Our associate sponsor ACA models, the Belfast based model agency, scouted Bernadette for this year's Miss Northern Ireland contest. Bernadette impressed the judges with her beauty, intelligence, and passion which secured her position as a finalist. She is an inspirational young woman who earned her place regardless of her disability, and we are delighted to help her use our platform to raise awareness and promote body positivity for differently abled people in Northern Ireland and the rest of the world. We look forward to getting to know her and the rest of the finalist's ahead of the Gala Final which will take place at Belfast's Europa Hotel in September 2021."

The Miss World Organisation said Bernadette was “as worthy as anyone else to participate.”