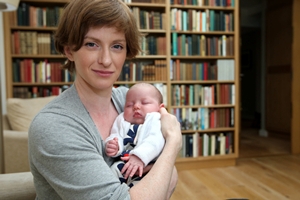 A Cambridge University student has graduated with a FIRST CLASS degree despite sitting her exams just 28 HOURS after GIVING BIRTH.

Isobel Cohen, who studied English, was heavily dosed up on painkillers and her new baby daughter Beatrice was in intensive care when she sat her finals in the maternity ward.

The 33-year-old had spent 18 hours lying in a hospital bed after being induced and suffered a difficult labour with doctors eventually using forceps to get baby Beatrice out. Isobel was wearing a hospital gown and was still attached to a catheter when her tutor turned up in a university gown with the practical criticism paper at Addenbrooke’s Hospital in Cambridge.

“At the time it seemed like a perfectly legitimate thing to do, but now I look back and think it was slightly insane,” said Isobel, a former professional dancer. I was sitting in a hospital room in my gown attached to a catheter. The only good thing was I didn’t have to leave the room to go to the toilet. I was feeling quite bruised and it was very painful to sit down for three hours. Looking back I don’t know how I held it together, I think I operated on adrenalin. Now I have full-blown nappy brain.”

Isobel, who studied at Lucy Cavendish College, said Beatrice’s birth had not been planned and was a total surprise. She had hoped that she would follow in her mum’s footsteps and her baby would arrive at least a week late, giving her time to sit at least two of the exams. But a scan showed Beatrice may have a digestive tract disorder so doctors arranged for Isobel to be induced early.

“Beatrice’s birth wasn’t something I had planned to coincide with my finals and when I found out I was pregnant I was really shocked,” she said. “I read somewhere that only five per cent of first borns arrive on time and my mum was two weeks late with me and my brothers so I thought I’d be ok.”

Isobel had hoped her baby would be induced at the Rosie maternity ward at Addenbrooke’s in Cambridge on May 15, still giving her time to sit the exams. But there was no specialist cot available so Isobel had to wait until May 22. Beatrice was born at 8.30am the following morning weighing 6lb 10oz and 28 hours later at 2pm on May 24, Isobel sat her exam. Isobel had been offered the chance of applying for a DDH – “deemed to have deserved honours” – instead of doing her exams but decided to go ahead.

“I had studied for three years and I was determined to get a good result,” said Isobel, who is married to Ewan Campbell, 28, a musical composition PhD student.

“Maybe I was being desperately obsessive but I knew whatever happened I should be able to get a better result than what the university would give me if I didn’t take the paper. My mum was very supportive and at one point my husband was helping me revise while I was expressing milk, not very glamorous, but it worked. My concentration and memory were not as good as they might have been, but luckily I could still retain enough information to write decent essays.”

Just a day later Isobel had to sit a second exam on Shakespeare and the Greek Tragedies. Then a week later Isobel sat the third paper, just hours after she had returned to hospital with an infection in her stitches. Little Beatrice had been taken to the neo natal intensive care unit straight after birth, but tests revealed she was perfectly healthy.

“I am really lucky. Beatrice is doing well and I’ve managed to get the degree I wanted,” she added.

Dr Stephanie Ellington, senior tutor at the college, said: “What Isobel has achieved is a phenomenal result – to gained first class honours on such a tough course, under such remarkable circumstances is truly worthy of applause and a sign of just how far Isobel is likely to go in the future.”

Isobel originally turned down a chance to study at Cambridge University after finishing her A-levels to pursue a career on the stage. She plans to apply for an MPhil at the university in 2013 and in the meantime she is doing a one-day a week role raising the profile of mature undergraduates.