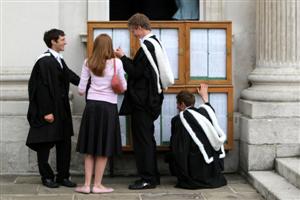 After three centuries this will be the last year students at Cambridge University learn their exam results from a public notice board because it is too stressful for them.

The 300-year-old tradition of publicly posting exam results outside the Senate House for everyone to see is to be radically changed after a lengthy student campaign.

For years undergraduates have argued the tradition of posting names and grades can be hugely stressful, particularly for those who find out second-hand that they have passed or failed.

Results for some exams such as the Maths Tripos, are even publicly read out from the balcony of the Senate House.

From next June however University officials say they will send students their results by email before they are posted at the Senate House.

“There are proposals to ensure that students at the University of Cambridge have access to their exam results via email before they are posted on the Senate House Noticeboards,” said Professor John Rallison, Pro-Vice-Chancellor for Education.

“However due to the need to consult thoroughly with Faculties and Departments on any possible implications this will not be introduced before June 2010.”

Students have welcomed this more humane way of telling them how they have fared in their finals but are annoyed it will not be in place this year.

“It’s great news but it’s a bit late as this issue has been going on a number of years and another year of stalling just isn’t good enough,” said Ant Bagshaw, CUSU education officer.

“Posting the exam results is tradition for tradition’s sake and there is no justification in it.

“The big stress is other people finding out your exam results before you. There is a lot of student anxiety about it.

“It shouldn’t have to wait another round of people being upset unnecessarily by this process.”

A survey carried out by the Cambridge Student Union (CUSU) earlier this year showed most students want to receive their results privately.

Many also felt an overwhelming sympathy for those who find the current process distressing.

“It's an archaic and quite unnecessary ritual that needs to be done away with,” said one student.

Another added: “I think it is unfair, pressurising and completely out of order that our names and grades are published and stuck up outside Senate House.

“However interesting it is to know how your peers have done in the exams, it is humiliating for people who haven't done as well and adds to the pressure every Cambridge student feels his/herself under.

“We are highly-motivated and passionate enough about our academic work to want to do well without being intimidated into it.”

A third student said: “The current system does not help Cambridge's problem of stress and depression in its undergraduates.

“The natural interest people have in their peers' results is unavoidable but should not be encouraged by publishing results.

“Post-exam competitiveness does not help the majority of students.”

At Oxford University students can opt-out of the class lists without explanation, but at Cambridge the circumstances have to be exceptional, such as mental illness.

Students are still campaigning to make the opt-out system more accessible, but feel that emailing results first would be a step forward.

“Emailing doesn’t completely solve the problem but it would stop other people finding out your results first and allow those who do badly to have some time to adjust,” said Ant.

“This year all we can do is make sure students know they can try and go through their college to have their name removed, but the success varies hugely depending on the college.

“It’s good that officials have said they will change the system but I’ll believe it when I see it.”