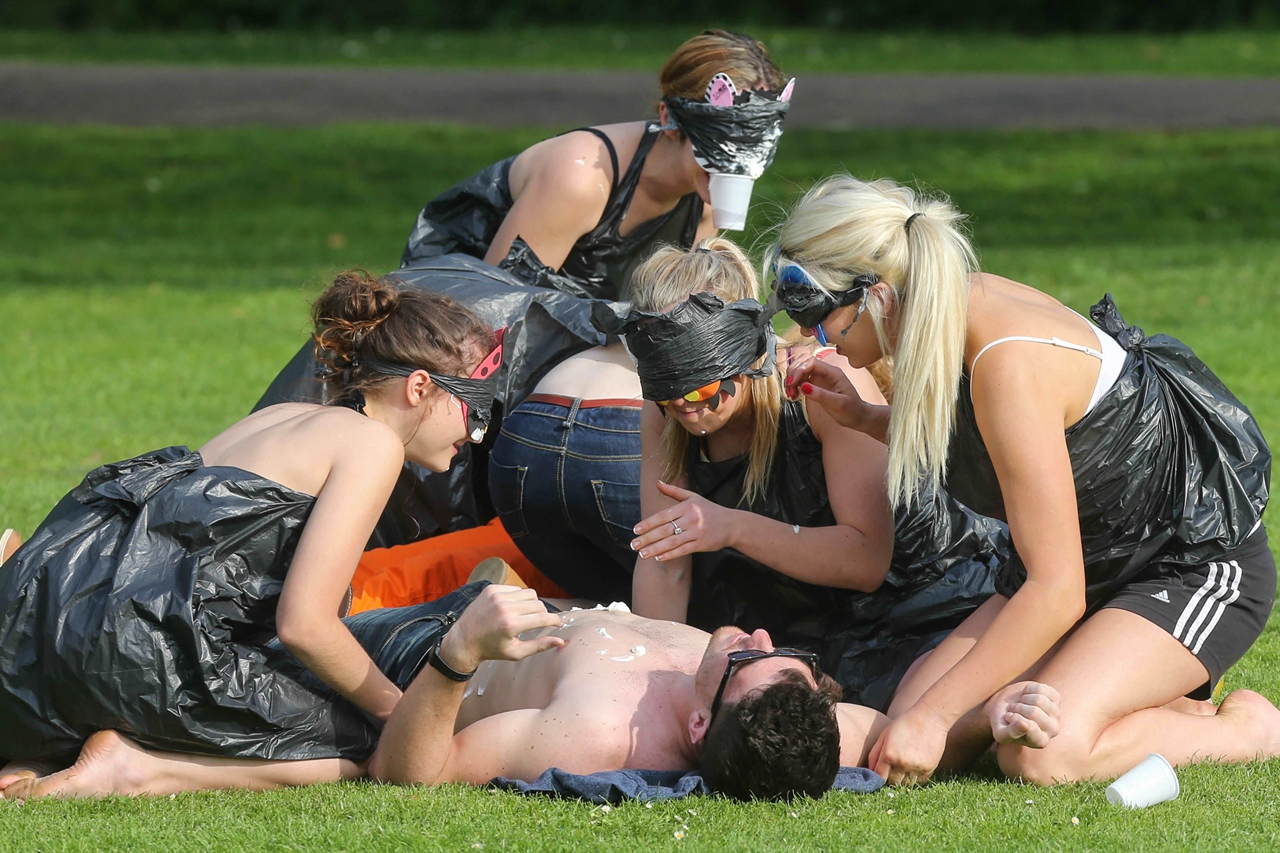 Passers-by were shocked to see more than 1000 drunken Cambridge University students STRIPPING OFF and VOMITING at a riotous summer term party in a PUBLIC park in the historic city centre.

Families enjoying the spring sunshine were disgusted to see rowdy students downing excessive amounts of alcohol, then THROWING UP and WEEING in the park flower beds at midday on a Sunday afternoon.

More than 1000 students attended the annual party, known as Caesarian Sunday, which historically takes place on Jesus Green in Cambridge on the first bank holiday of the summer term.

Many of them were members of the college drinking societies and spent the day taking part in shocking and bizarre initiation ceremonies. Girls were seen drinking port through condoms, while others wore kippers round their necks while they downed pints. In the middle of the afternoon onlookers were shocked to see an organised FIGHT between the Caesarians, Jesus’ inter-year drinking society and the Girton Green Giants, which saw blood shed as students chanted and cheered.

“The way the students were behaving in a the park was absolutely disgusting,” said one passer-by.

“It was only midday on Sunday and there were lots of families and young people walking by the river and enjoying the sunshine.

“The students were running around semi-naked, vomiting and singing rowdy drinking songs.

“It’s not something I’d expect to see in the centre of Cambridge on a Sunday afternoon and I’m furious my kids were exposed to it.

“Some of the students were totally out of control.”

Cambridge University students take part in Caesarian Sunday every year to mark the start of the summer term. Legend has it that a member of the Girton Green Giants once stole a bottle of Pimms from a member of the Jesus college Caesarians. The bottle was subsequently thrown at the group of Caesarians in a challenge to a fight. Now every year the president of Girton’s drinking society downs a bottle of Pimms and invites the Jesus drinking society to fight.

This year thousands of students shouted and cheered at around 3pm as more than 20 male students with “war paint” on their faces viciously fought on the Green. One team, wearing make-shift togas, marched behind a pig’s head on a stake as they headed to battle. Many then continued to drink all afternoon, before jumping in the nearby River Cam in their underwear or staggering to the nearby night clubs. A lot of the students, both male and female, could barely stand and at one point police officers were seen trying to stop students weeing in a park bush.

“The fighting was pretty vicious this year,” said a Cambridge student, who did not want to be named.

“A lot of the stuff which goes on is really quite shocking, especially as it’s in a public place, but most of the students are so drunk they just don’t care.

“Many of them started drinking at breakfast, or even the night before and have just carried on drinking all day.

“For the drinking societies it is one of the biggest events in their calendar and some graduates even come back specially for the occasion.

“Many of the students think they work hard so deserve to drink and party and somehow justify it.”

Caesarian Sunday is seen as the birth of the drinking parties for the summer term, which ends with the notorious after-exams party, Suicide Sunday, in June.