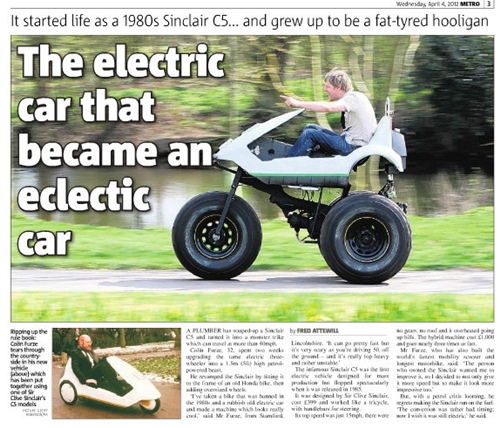 A man has pimped a Sinclair C5 and turned it into a MONSTER bike which can go more than 40mph. Colin Furze, 32, spent two weeks upgrading the electric three-wheeler into a petrol-powered machine, which towers five foot off the ground.

He souped up the slow Sinclair by fitting it to the frame of an old Honda bike, then added giant two-foot tall wheels.

"I've taken a bike that was banned in the 1980's and a rubbish old electric car and made a machine which looks really cool," said Colin, from Stamford, Lincs. "It can go pretty fast, but it's very scary as you're driving five feet off the ground and it's really top heavy and rather unstable."

The electric Sinclair C5 was the first electric vehicle designed for mass production but it was a flop when it was released in 1985. It was designed by Sir Clive Sinclair, cost £399, and worked like a tricycle with handlebars for steering. It's top speed was just 15mph, there were no gears, no roof and it overheated going up hills.

"The person who owned the Sinclair wanted me to improve it, so I decided to not only give it more speed but to make it look more impressive too," added Colin. "I wanted to keep some of the Sinclair features such as the weird steering so the steering circle is still massive, about two widths of a road. "It's quite hard to control as you are so high up and it's a bit worrying as you constantly feel as though you are about to topple over."

Colin, who has previously built the world's fastest mobility scooter and longest motorbike, says that with the petrol crisis he is beginning to wish he had kept the Monster Sinclair electric.

"The conversion was rather bad timing, now I wish it was still electric," he added.