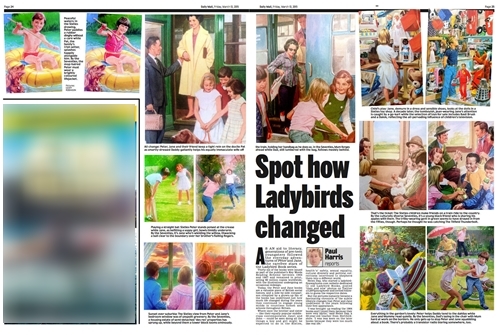 Thousands of nostalgic baby boomers have taken part in a Twitter challenge to spot the difference between popular Peter and Jane pictures in Ladybird books from the 1960s and subtle new versions drawn a decade later.

Helen Day, who has more than 10,000 Ladybird books, enjoys comparing the famous Reading Scheme books. These were printed in 1964, then updated in the 70s and 80s to reflect Britain’s changing society.

She started posting the “before and after” illustrations on her Twitter feed, Ladybird Fly Away Home, and now has more than 5,000 followers. The new artwork shows how seat belts, life jackets and pavements were added to the original pictures as people became more safety conscious.

Peter and Jane’s clothing was also given a makeover, from smart dresses and trousers to scruffy jeans and dad was shown helping more around the home. But many of the changes in the books are so tiny they are easy to miss at first glance and Ladybird book enthusiasts have enjoyed spotting and commenting on them.

“The pictures from the 1964 books had quite a retro feel even at that time, which is why they were changed just 10 years later,” said Helen. “Britain changed a lot during the 60s and 70s as there was more awareness of sexual discrimination and people became more safety conscious and the books started to look quite dated. Parents and teachers wrote in to complain and many of the books were given a subtle makeover to bring them up-to-date.”

One of the most popular set of “before and after” pictures on Helen’s Twitter page shows Mummy and Daddy wrapping up Christmas presents. In the 1960s Mummy is wrapping the present and Daddy is just watching, but in the later version Daddy is pictured enthusiastically holding a pink ribbon and taking part.

“The artwork is almost identical, but there is a very tiny difference and it shows that the role of Dad has started to change,” said Helen. “There is another photo called The Picnic in which Daddy is shown dressed in a suit and looking very uncomfortable, but by the 70s he is dressed down and joining in. Other pictures have been altered as parents became more safety conscious. A life jacket has been drawn on to a little boy in a dinghy, dogs are put on leads and a pavement is drawn alongside an ice cream van, instead of showing children running into the road. Another illustration, The Car Journey shows Peter and Jane both sitting in the front of the car with Daddy in the 1960s, but a decade later seatbelts have been added and Peter is now on the back seat,” added Helen. “In another drawing the children are shown running to a stream to try out their new boat, but in the later pictures an adult is now with them to keep them safe and the water has been made shallower.”

Other pictures show how the world has become more urban and modern by the 1970s. A drawing of Peter and Jane watching a sunset out of their window shows a view of the countryside in the early work, but this is later replaced by an urban sprawl. Even a trip to the sweet shop is brought up-to-date with scales and a shopkeeper in the first picture and a self-service approach by the 1970s. Jane is also no longer seen feeding a sweet to the dog inside the store due to stricter thoughts on health and safety. Peter and Jane are also given modern makeovers in the new pictures, with Jane’s crisp white dress replaced by scruffy jeans. Their roles become less stereotypical as the books evolve, with Jane finally allowed to use a cricket bat and jump over a cardboard box.

“Many of the early pictures show Peter and Jane playing nicely together, but in the later ones they are seen arguing and behaving a bit more like a typical brother and sister,” she added.

Ladybird also decided to introduce more ethnic characters into its books as racial awareness increased. The station guard is given darker skin and a little dark-skinned boy is positioned in the railway carriage.

Helen added: “You can also see the role of women evolving, with mum being helped down from the train in a 1960s picture, but being allowed to step down on her own in the later one, even with shopping bags.”

Helen, who has been collecting Ladybird books for 15 years, said people like looking at the books because it takes them back to their childhood. “I think the pictures offer pause for thought and transport them back in time, they pack an emotional punch,” she added. “Many of the early Peter and Jane books had a big impact on people’s lives because they were the first books they ever read in school. “I was brought up reading the 1964 books and I loved them because they were very idyllic, I was less keen on the later books because they were too much like real life.”