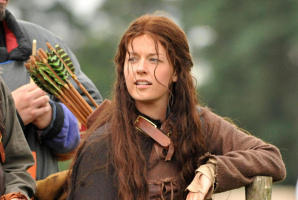 A fan of fantasy trilogy Lord of the Rings has spent SIX YEARS and her entire life savings creating a stunning PREQUEL to the films.

Kate Madison, 31, spent an incredible £25,000 making the film, Born of Hope, which has already been watched by more than half a MILLION people.

The story was inspired by just a couple of paragraphs written by Middle Earth creator JRR Tolkein in the appendices of The Lord of The Rings.

But the film, which was shot in Suffolk, will not earn Kate a penny because fan films are not allowed to make money.

"I didn’t know much about Lord of the Rings until the Peter Jackson movies came out," said Kate, an actress from Cambridge.

"These were fantasies without being completely unreal and I really enjoyed them.

"Then I spotted something online in 2003 about a Lord of the Rings convention which was going to do a fan film competition and it sparked an idea.

The competition wanted fans to create a five-minute film in the style of Peter Jackson’s trilogy, but Kate’s plans were far more ambitious.

"I advertised for actors and got more than 100 CVs. I realised I was a little out of my depth so I shelved the project to get some filmmaking experience," she said.

Kate joined the Cambridge Filmmakers Network where she acted in and directed short films, then decided to give Born of Hope another go.

"The competition was well over by now but I still wanted to make the film," she said. "My idea was always to do something that was high quality – not just a running around in the back garden type of thing.

"So I ended up coming up with the idea for a prequel, which basically slots on to the front of the Lord of the Rings films, with the aim of trying to fit in with the universe that Peter Jackson created, without looking out of place with the fact that we didn’t have a budget."

The film is set in the time before the War of the Ring and tells the tale of Dunedain, the Rangers of the North, before the return of the King.

The plot follows Arathorn and Gilraen, the parents of Aragorn, from their first meeting through a turbulent time in their people’s history.

"Aragorn is an extremely important person in Lord of the Rings," said Kate.

"But we don’t know much about him except he is a ranger and becomes king.

"People wanted to know where he came from and what his people were like before he becomes king."

Kate, who stomped up the budget for the film from her life-savings, now hopes it will spark acting and production careers for the 400-strong team.

The Hunt for Gollum has become one of the most famous fan films in recent years and notched up two million online views in its first month of release after Lord of the Rings studio bosses agreed to let the movie exist.

Peter Jackson’s Lord of the Rings trilogy was filmed in New Zealand over eight years and cost $285 million.

It was considered to be one of the biggest and most ambitious films ever undertaken.