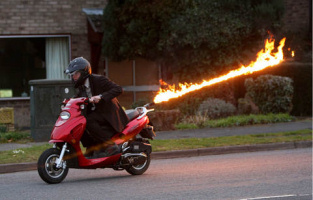 A James Bond fan who was fed up with drivers cutting him up has invented the ultimate gadget to gain his revenge – a moped which fires 15ft FLAMES.

Colin Furze, 30, spent a month converting the sports scooter, which can travel up to 60mph and blast anything which comes too close.

It took three attempts to make the flame-throwing moped, which works by pressing a button on the handlebar.

"It’s a lot of fun and when I fire the flames out the back it makes me feel just like James Bond," said Colin.

"The flames are pretty big and up to 15 feet long so you could definitely set fire to someone’s car if you wanted to.

"The only problem is it can get rather hot if you are riding the moped and blast the flames when the wind is in the wrong direction."

Colin, a plumber, initially tried fixing his road-rage weapon to a BMX bike and it worked so well he decided to try it on his moped.

Now he has even attached a lever to change the angle of the flames.

"It was quite tricky to make and the first version wouldn’t fire the flames when the moped was moving," he said.

"My second attempt kept setting fire to itself, but my third version works really well and I’m very pleased with it."

But sadly Colin, who built the moped in his spare time in his back garden in Stamford, Lincs, will not legally be allowed to use it on the road.

"I’ve been told that if I fire the flames while riding on the road it’s equivalent to using a fire arm and I could be in a lot of trouble," he said.

"Unfortunately I won’t be able to ride it into the centre of town but it’s a lot of fun and I’ll use it off road."