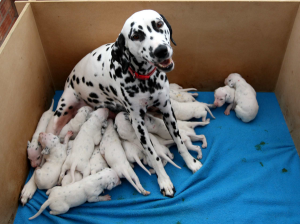 A Dalmation has broken the world record by producing a massive 33 puppies in just two separate litters.

Button equalled the UK's record of 15 puppies in one litter just over a year ago and now she has knocked spots off that with another amazing 18.

Each pup weighed about one kilogramme when they were born by cesearean section at the vets and are all doing very well.

But life is very hectic for Mrs Morley, husband Adam, 40 and their three children Michael, 17, George, 9 and Thomas, 7, who are having to feed the dogs every hour for 24 hours a day.

Button, whose dad appeared in 102 Dalmations, feeds one group of pups, while the family feeds the other two, then an hour later they swap groups.

"We're bottle feeding them and it's very tiring, especially as I have to work, but it's also very nice," she added.

"My eldest son is helping us with the feeding routine and the large litter is especially nice for our son Thomas as he has special needs.

"With the previous litter they helped him develop empathy and understanding and he was like a changed person."

The family, who live in Melton, Lincs, plan to sell some of the pups and give some to family and friends who had Dalmations from the previous litter.

Two of the pups from Button's first set already have TV contracts, with one appearing in Taggart.

"We will have to sell some as the cost of looking after the pups is astronomical," added Mrs Morley.

"It's been fantastic having the puppies but we won't be doing it again as it's too much to cope with."