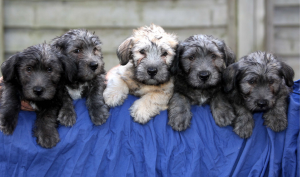 These five cute puppies have helped to make it a record year for Britain's most endangered breed of dog.

Only 1,000 Glen of Imaal terriers are left in the world - less than the Giant Panda.

Experts feared they could soon become extinct after just 36 puppies were registered last year, compared to 45,000 labradors. But these adorable new arrivals mean 81 pups have already been born in 2008 - making it the best year for the rare breed in over a decade.

"We are very pleased to hear about the birth of healthy Glen of Imaal Terrier puppies," said Caroline Kisko, from the Kennel Club.

"It is positive to note that the breed has seen a significant increase in registrations this year."

With just 26 breeding bitches in Britain, the birth of playful pups Footprint, Fidget, Bruiser, Kate and Little Nicky has delighted the dog world.

One of the nine-week-old litter of two females and three males has already gone to a new home and owner Adam Stoll, 44, is hoping to keep Bruiser as a show dog to raise awareness of the breed.

"When they were born I had a tear in my eye because it's such a rarity - it's like watching a miracle happen," he said.

"We were shocked to see so many puppies. Their mum Pebbles actually gave birth to seven, but one was still born and the other was accidentally smothered by her siblings.

"They are absolutely beautiful and I'm hoping to sell them to people in London where they will hopefully produce more litters."

Glen of Imaals are now at the top of the Kennel Club's most vulnerable list.

Experts blame the popularity of small designer dogs such as the pug and shi tzu with celebrities including Paris Hilton and Britney Spears for the dramatic decline in this and other British breeds.

Over the last 10 years an average of just 40 Glen of Imaals have been registered in Britain each year but with double that number born in 2008 there is now renewed hope for the rare breed.

Caroline Kisko added: "There is no specific reason why the popularity of certain breeds goes up or down but we do know that celebrity choices and the public profile of breeds can have an effect.

"The Glen of Imaal Terrier is a wonderful active dog. They are spirited and courageous when called upon and need a strong and assertive owner to control them, but they are also affectionate and gentle pets.

"It's essential that we do all we can to protect breeds, such as the Glen of Imaal, so that we can ensure that future generations will be able to enjoy their companionship."

The dogs were first bred in Ireland to hunt foxes and badgers and their traditional terrier instincts meant they could also be trained to fight other dogs.

They have bowed front legs with feet that point outwards and grow to no more than 14in high and 21in long.

Some owners call it the "spare-part dog" because it looks like a combination of breeds.

Mr Stoll, who has been caring for the puppies with the help of his wife Simone, 45 and their children James, 24, Talya, 18, Nik, 16 and Georgia, 14, said: "They are like a big dog with little legs and have a personality and a half.

"They are a fighting breed but very loveable and adore children."

Anne Hardy, secretary of the Glen of Imaal Terrier Association, added: "We're pleased that the breed is being recognised for the beautiful breed it is.

"The Kennel Club has been supporting us and helping to raise the profile of the dog, but there is still a long way to go and we need to research different blood lines and improve the gene pool.

"However if interest in the Glen continues to improve and everyone works together then the future is looking brighter for this rare breed."