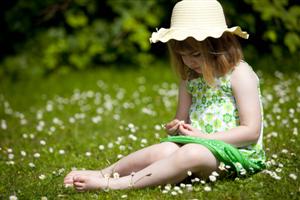 Children are making daisy chains by the dozen this summer after the mix of wet and warm weather produced plants with extra LONG stalks.

An abundance of the most spectacular daisies in 15 YEARS have been popping up in parks and gardens across Britain.

Plant experts say the good mix of rain and sun in recent weeks has helped the common daisy to flourish, giving them more flowers and longer stalks.

“Daisies are really thriving and are much bigger and more vibrant than normal this year,” said Dominic Price, a botanist at Plantlife, based in Wiltshire.

“The combination of just enough wet weather, followed by lots of sun over the past few weeks has provided perfect growing conditions for the plant.

“They are showing some of the most spectacular growth patterns for the last 15 years.

“The plants are re-flowering much more quickly after being mown so there are lots more daisies around.

“The stalks are also much longer because of the amount of rain we have had.

“It’s one of the best years we’ve had for daisies and great news for children who like making daisy chains.”

But it is bad news for gardeners as the pretty white and yellow weeds are resistant to lawn moving and this year particularly they are growing out of control just days after the grass has been cut.

“The daisies are completely ruining my grass, as soon as I mow the lawn they grown back again,” said gardener Sam Baker, 51, from Cambridge.

“I don’t like using weed killer but it may be the only answer.”

Wild Ox-Eye daises which grow at the side of the road and in meadows are also putting on a good show this year.

“In the last few years there has also been a trend towards people growing more daisies and Echinacea have become really popular.

“There has been lots of breeding work to get more colours and the latest shade this year is tomato soup.”
The flower heads of daisies open at dawn and close at dusk, giving daisy its name “Day’s Eye”.

Throughout history the flower has been used in medicine, with primitive medical men drawing the conclusion that its name meant it could cure eye troubles.

In ancient Rome, surgeons ordered their slaves to pick sacks full of daisies to extract their juice which they used to help heal sword and spear cuts.

Daisy is also popular with homeopathic practitioners and it has been used to treat a multitude of ailments such as rheumatism, bronchitis and kidney problems.

The flower is also currently being investigated for treatment of HIV.

The fresh flower heads can be eaten in salads and for centuries they have also been added to baths.

An old English saying suggests that if you dream of daisies in the spring or summer it is good but in the autumn or winter it is bad luck.

According to an old Celtic legend, the spirits of children who died in childbirth scattered daisies on the earth to cheer their sorrowing parents.

Another superstition says that children made daisy chains as a protective device against being stolen by fairies.