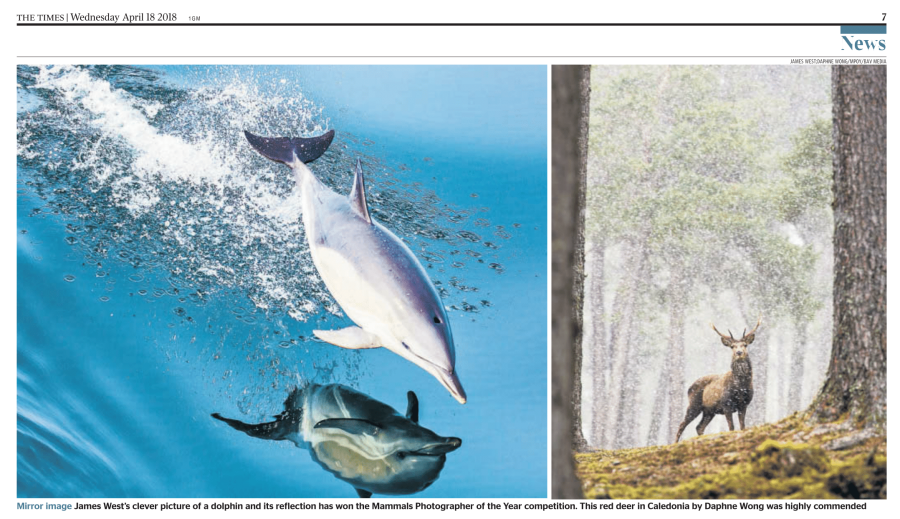 A striking photo of a dolphin reflected in the sea has won an annual photo competition to celebrate British mammals.

The photo, taken by James West, from Hampshire, was among 350 amazing wildlife pictures snapped in the British Isles for the annual Mammal Photographer of the Year competition. James, who took the picture near the Cairns of Coll in Scotland, said the reflection added a different dimension to the picture.

“The sea was very calm and like a mirror. As I examined the shots afterwards, I could see not only a sharp photograph of the dolphin but also its reflection in the water, revealing a beautiful creature in motion with tremendous power and grace,” said James, from Chandler’s Ford. “The reflection adds a different dimension to the shot, bringing out details that a shot from above couldn't have done by itself.”

Chief Judge Hilary Conlan, editor of Mammal News, said the picture conveyed the “elusive and fleeting nature of this encounter beautifully.” She said: “It is hard to photograph dolphins completely out of the water as well as capturing not only the reflection but also a sense of speed and purpose.”

This year’s runner-up was Alastair Marsh, from Ripon in North Yorkshire, who took an incredible photo of a majestic stag in a blizzard.

He said: “Just after Christmas 2017, and with an amber weather warning for snow, I couldn't pass off the opportunity to photograph red deer local to me. My luck with the weather was in and the blizzard conditions were perfect first thing in the morning. The deer were grouped together so trying to get a photo of one on their own was a challenge, not to mention getting the camera to focus through the blizzard, but they obliged eventually!”

Judge Derek Crawley said the photo showed “the majestic beast in all its glory wonderfully framed by the trees and the snow.” He added: “Alastair has been very successful in taking a great picture with challenging light conditions.”