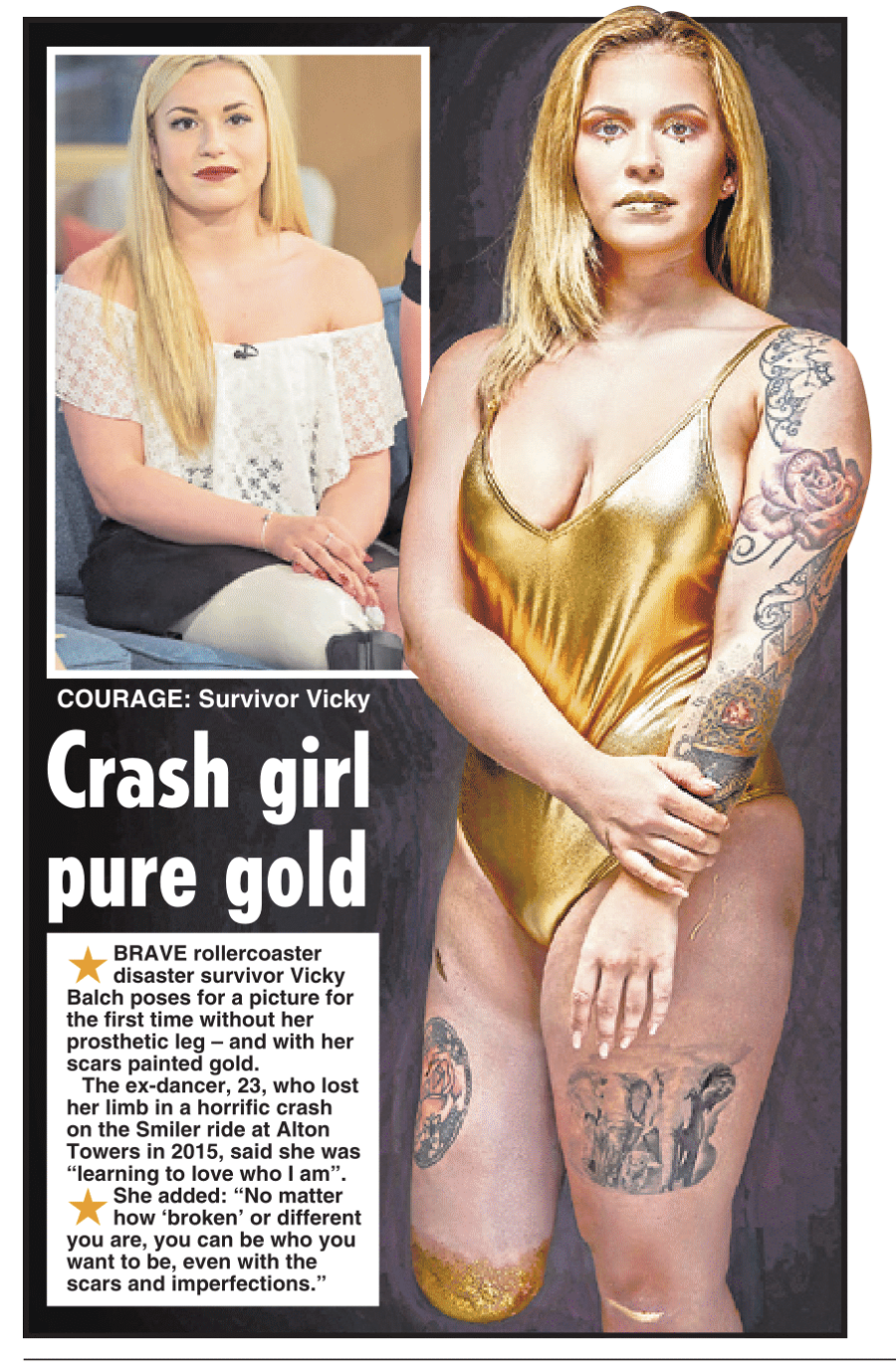 Alton Towers Smiler rollercoaster crash survivor Vicky Balch, who lost her leg, has taken part in a modelling shoot to HIGHLIGHT her scars.

The 20-year-old former dancer had her scars painted GOLD for the Kintsugi shoot, which was organized by specialist model agency, Zebedee Management. Vicky, who had her right leg amputated at the knee after the crash in June 2015, wore a gold swimming costume for the shoot, which aimed to show that scars should highlight peoples’ beauty and uniqueness.

The photo shoot by Murat Ozkasim was based on the concept of Kintsugi, a traditional Japanese repair method, which celebrates each artefact’s unique history by emphasising its fractures and breaks instead of hiding or disguising them. The repairs often make the piece even more beautiful than the original and revitalize it with new life. Zoe Proctor and Laura Johnson, who run Zebedee, wanted to explore the tradition, and the parallels it has between people’s perception of beauty.

Vicky, from Lancashire, said the shoot had helped with her self-confidence and that she is now learning to love herself.

She said "I love the thought behind the Kintsugi shoot. Personally, doing this shoot portrays what I have wanted to get across since my accident; no matter how 'broken' or different you are, you can be who you want to be, even with the scars and imperfections. Body confidence was a big issue for me when my life changed and I am now learning to love who I am even though it is different to what, even I used to consider as 'normal'. Zebedee have helped me increase my self-confidence by helping us models do what we want when nobody else would and I'm grateful for everything they do and continue to do for me and I'm glad to say I have met a lot of people who I wouldn't have. Each campaign and shoot I have done with Zebedee has been a lot of fun and Murat is great to have behind the camera!”

Zoe Proctor said they wanted to look at the tradition of Kintsugi and how it could be applied to people.

She said “We wondered what it would be like if we thought of ourselves in the same way? That our scars and marks only go to highlight our beauty and uniqueness? It was this thought that became the inspiration for our shoot.”

Zebedee Management is a specialist talent agency set up to increase the representation of people with disabilities in the media. It was established in 2017 and already looks after over 250 models and actors with a variety of needs. They have already secured contracts with big brands such as River Island, Matalan, Superdrug, Disney, Tesco, ASDA, and the BBC.