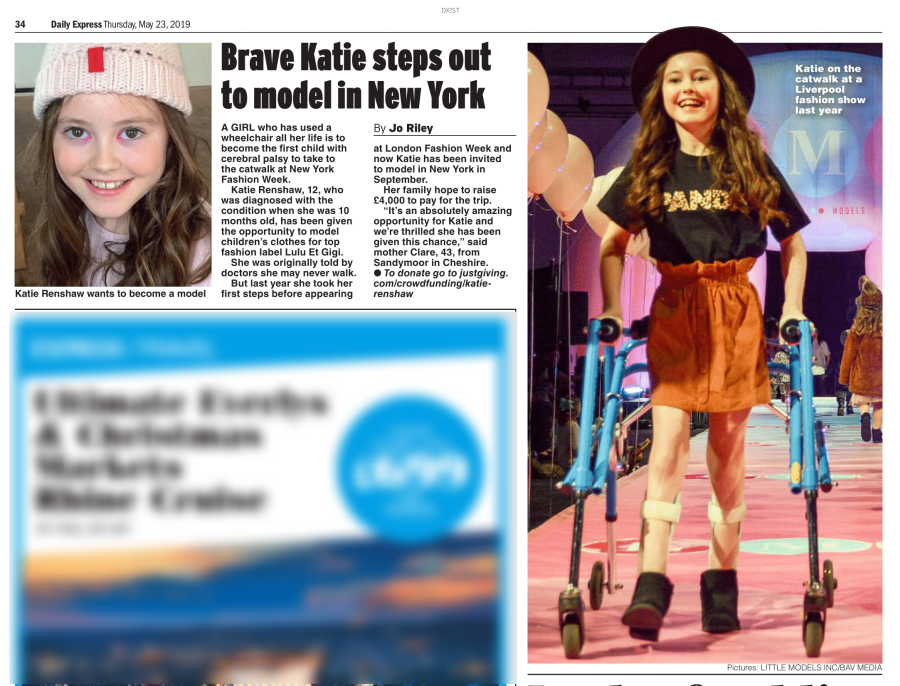 A 12-year-old British girl, who has used a wheelchair all her life, is set to become the first child with cerebral palsy to walk down the runway at New York Fashion Week.

Katie Renshaw who was diagnosed with cerebral palsy when she was 10 months old, has been given the incredible opportunity to model children’s clothes for top fashion label Lulu Et Gigi at the world-famous event. The schoolgirl, who has been receiving treatment from Alder Hey Children’s Hospital in Liverpool since she was a baby, was originally told by doctors she may never walk.

But last year she stunned family and friends when she took her first steps and this Spring she amazingly walked down the runway at London Fashion Week. Now Katie has been invited to pursue her dream of being a model and appear at prestigious New York Fashion Week in September. Her family is hoping to raise £4,000 to pay for their flights and accommodation in New York, so they can help Katie’s modelling dream ambition come true.

“It’s an absolutely amazing opportunity for Katie and we’re thrilled she has been given this wonderful chance,” said mum Clare, 43, from Sandymoor in Cheshire. “She has worked really hard and we’re very proud of her. Unfortunately going to New York Fashion Week as a family is something we can’t afford on our own as the flights and accommodation aren’t paid for by anyone, but we would love to make this happen for Katie so we are now fundraising.”

Clare initially took Katie to the doctors when she was six months old and not showing any interest in sitting or standing. Then at 10 months old she was seen by a paediatrician, who transferred her to Alder Hey, where she was diagnosed with cerebral palsy. Katie has spent most of her life in a wheelchair, but three years ago she had a nine-hour operation to straighten her feet and legs, which involved having 10 incisions in her legs. She has since had another operation to correct her hips and thanks to intensive physiotherapy and hydrotherapy she remarkably now walks mainly unaided.

Katie has always dreamed of becoming a model and last year she signed to top modelling agency, Zebedee Management, which represents people with disabilities. She has since done shoots for top high street brands, including a school uniform campaign for Matalan and the "#Labels are for Clothes" campaign for River Island. Earlier this year, Katie, who now gets about with a K-Walker and uses a wheelchair if she is tired, also modelled clothes for Panda London at London Fashion Week.

Her family, including dad Steve and little sister Ella, six, has now set up a Just Giving page to raise funds to get Katie to New York Fashion Week and her school is helping by having a non-uniform day.

Katie, who is a charity ambassador for Alder Hey hospital and has helped to raise funds for them with sponsored walks and collections, said: “It would be amazing to be the first child with cerebral palsy to walk New York Fashion Week and I want other children to be inspired by me. It’s a massive opportunity which I would love to do.”