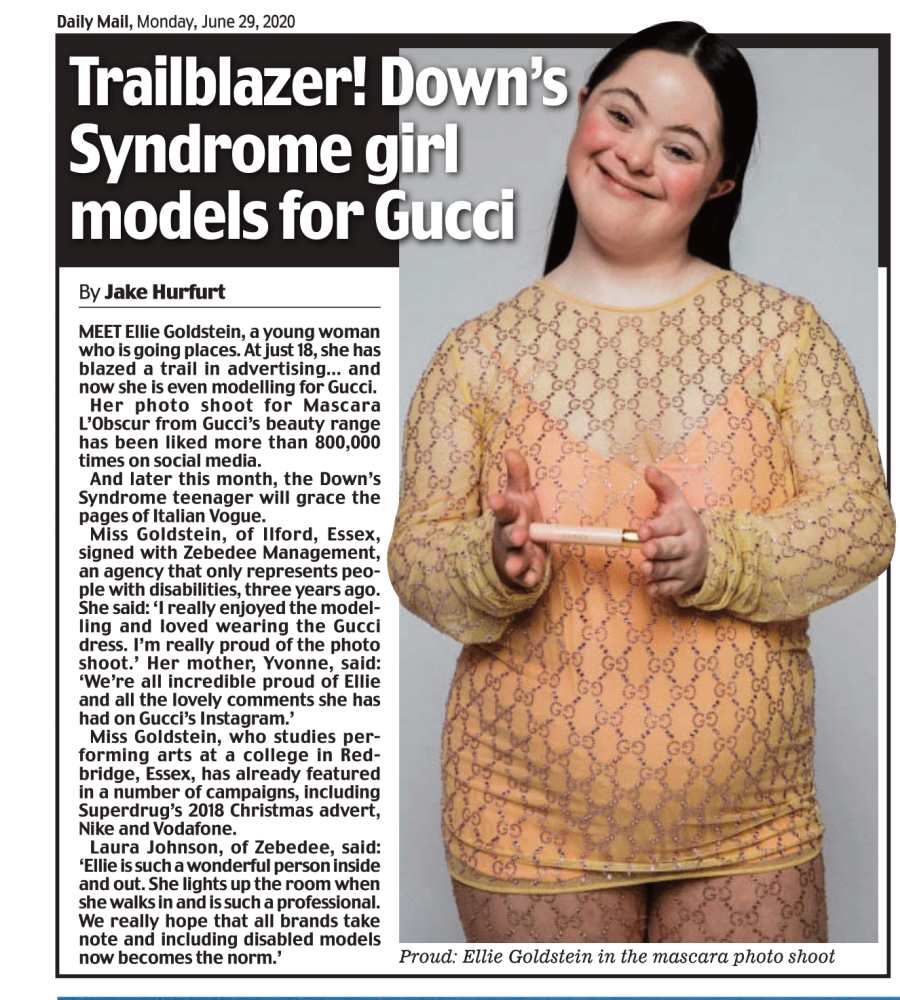 A teenager has become the first model with Down’s syndrome to pose for Gucci Beauty - with her pictures appearing in Vogue Italia.

Ellie Goldstein has also become one of the brand’s most popular posts on their Instagram page, with almost 800,000 likes. The 18-year-old modelled Gucci Mascara L’Obscur for the campaign, with her photo receiving hundreds of positive comments on Instagram.

The teenager, who has always wanted to be famous, signed to Zebedee Management, an agency which represents people with disabilities just over three years ago and the bookings have been pouring in ever since.

“We’re all incredibly proud of Ellie and all the lovely comments she has had on Gucci’s Instagram,” said mum Yvonne, from Ilford in Essex. “She has always loved being in the limelight and in front of the camera, she’s very confident and good at taking direction. My mum always said she had a feeling Ellie would be someone some day and my friends always say she should have her own TV show as she has a great sense of humour and is a natural on camera.”

Ellie, who is currently doing a Performing Arts Course at college in Redbridge in Essex, spent a day in London doing the Gucci campaign with two other models.

She said: “I really enjoyed the modelling and loved wearing the Gucci dress. I’m really proud of the photo shoot and would love to be famous. I’m looking forward to modelling for other brands.”

Yvonne said Ellie, who has an older sister, Amy, aged 25, has always enjoyed performing and started attending drama and dance classes from the age of five. “Drama is her passion and she has been in lots of shows. She is very outgoing and wants to be seen and heard,” she added. “She is very good at English and has a great memory which helps with memorising scripts.”

A friend saw Zebedee Management on This Morning and encouraged Yvonne to put Ellie forward and she has been on their books since 2017. She has already taken part in a number of advertising campaigns, including the Superdrug Christmas advert in 2018, which was shown on primetime television. Ellie has also modelled for a Nike advert centred around the Women’s World Cup last summer, which was featured on the big billboard at Piccadilly Circus in London and appeared in promotions for the London Film Festival and Vodaphone.

“She is very focused and knows exactly what she wants to do. In her spare time she loves dancing and socialising with her friends,” added Yvonne. “We have been thrilled with all the jobs she has got through Zebedee and we’re hoping other brands will now follow.”

Zebedee Management said that research suggested that only 0.06 per cent of those featured in advertising have a disability, and that reduced to 0.01 – 0.02 per cent when looking at fashion and beauty advertising.

Laura Johnson, of Zebedee, said: “This is only one or two models in 10,000! Brands can no longer say that the ‘public don’t want to see’ disabled models, as this Insta post proves otherwise. Inclusion of all people in the industry is so important, not only because it the right thing to do ethically, but also makes good business sense. The spending power of disabled people is estimated at £249 billion per year - it's a massive market!”

They added: “Ellie is such a wonderful person inside and out. She lights up the room when she walks in and is such a professional. She is incredibly skilled and such a natural beauty. This means the world to her, her family and the wider community. We would like to thank Vogue Italia, Gucci and David Hyde for believing in her. We really hope that all brands take note and including disabled models now becomes the norm.”