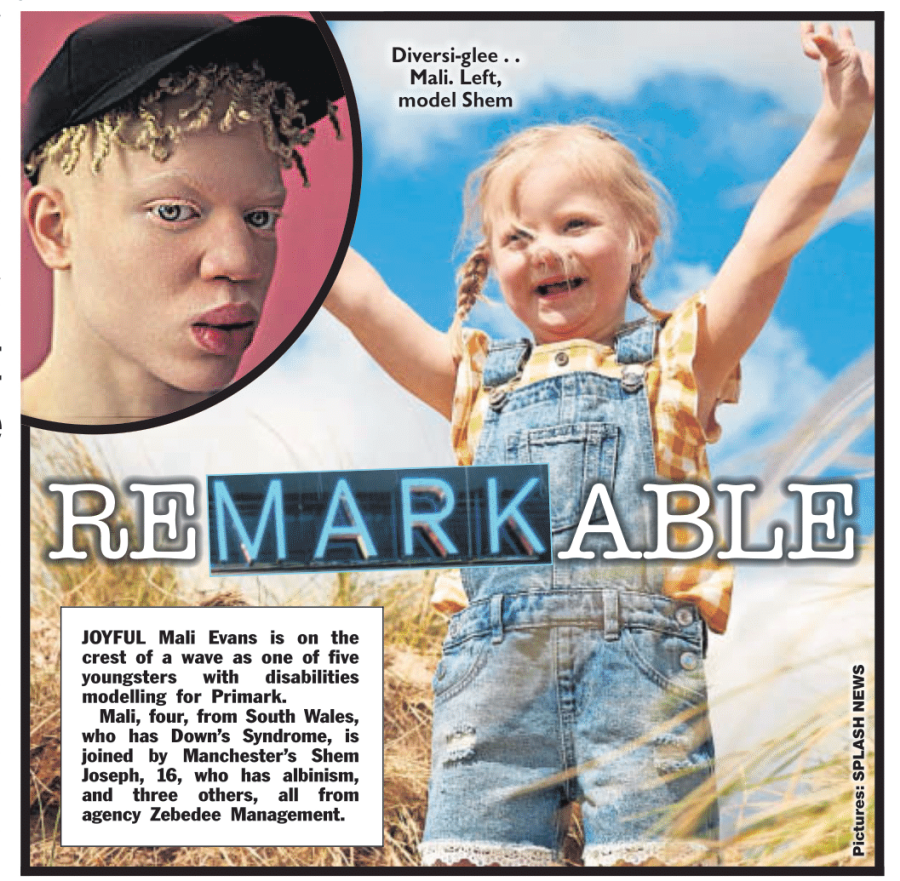 The youngsters, aged between four and 23, who have a range of disabilities including Down’s Syndrome, vitiligo and albinism, star in the store’s front windows and on its website. They are helping to promote the chain’s new Spring and Summer campaign, thanks to Zebedee Management, which specialises in working with clients with disabilities and alternative appearances.

The models include Mali Evans, 4 and Ellie Goldstein, 19, who both have Down’s Syndrome and Bailie McGloin, 23, who has vitiligo. Shem Joseph, 16, who has albinism and Amir Alquatati, 10, who has Autism, also feature in the new season campaign. Pretty four-year-old Mali, from South Wales, can be seen playing in the sand wearing dungaree shorts in her photo for the store’s summer campaign. The little girl, who is at mainstream school and has two brothers, joined Zebedee when she was two-and-a-half and this is her biggest campaign so far.

Mum Jessica Evans said: “We keep seeing Mali’s photo in all the Primark shop windows and it’s just amazing, I have to pinch myself. She went to Camber Sands in April to shoot the photos and absolutely loved it. She is a natural when it comes to modelling and works the cameras. The photographer said she made his job very easy. Mali is very girly and loves clothes and dressing up. She really enjoys being the centre of attention and also loves singing and dancing. I think it’s wonderful that Primark are using models who represent diversity because it means people are brought up accepting that everyone is different and different does not mean less.”

Bailie, 23, from Manchester, has been with Zebedee for two years and already modelled for Avon, Boots and Hollister. The full-time dancer and model said: “Modelling has helped me to accept myself more and make me realise that I do have an important role to play. Vitiligo has been a part of me for over half my life now and I wouldn't have it any other way.”

Shem, 16, from Manchester, has albinism and has been with Zebedee for two years. He is at college studying for his A-levels.

Ellie, 19 was the first model with Down’s syndrome to pose for Gucci Beauty - with her pictures appearing in Vogue Italia last July. Since then, she has become a boundary-breaking “supermodel”, appearing on the front cover of Elle, Glamour, Allure and Euphoria in the last seven months alone. She has also modelled for Hollister, Avon, Zalando, My Theresa and You Magazine and was recently named by Glamour as their Gamechanging Model of the Year 2021.

Zoe Proctor, of Zebedee Management, said: “Zebedee are so pleased to have our models featured in the storefront of a major UK high street brand. The representation that disabled people deserve is so important. We hope every disabled adult and child is able to see our models on the high street and know they are represented in society and they can achieve whatever they want.”