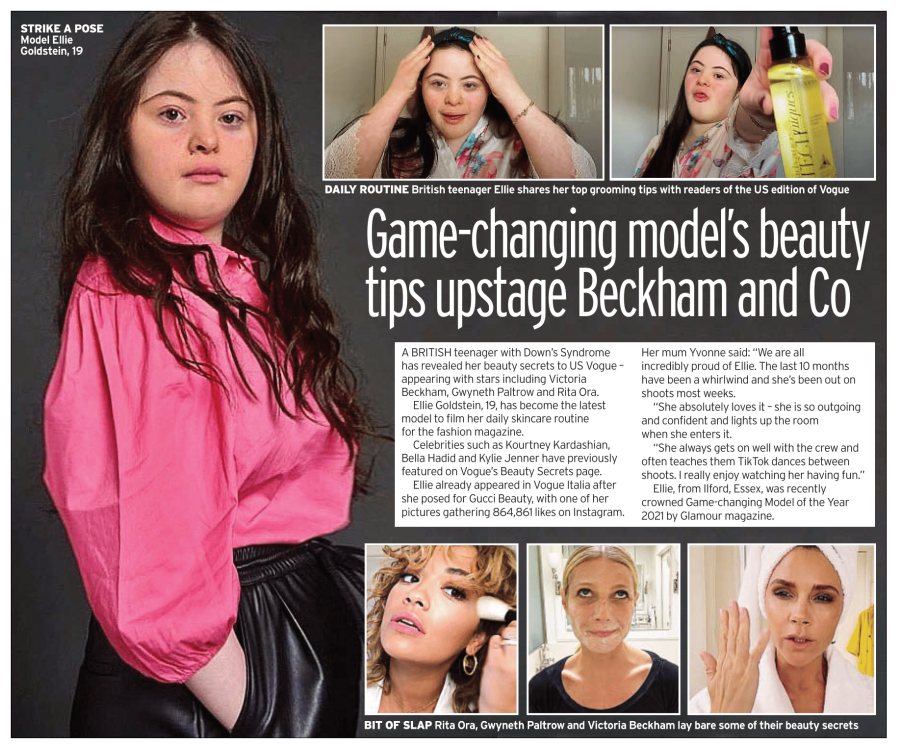 A British teenager with Down’s syndrome, who shot to stardom after posing for Gucci, has revealed her beauty secrets to US Vogue – alongside celebrities including Victoria Beckham, Gwyneth Paltrow and Kourtney Kardashian.

Ellie Goldstein, 19, has joined the likes of Rita Ora, Bella Hadid and Kylie Jenner in shooting a video of her daily beauty routine for Vogue’s famous Beauty Secrets page. The intimate series takes viewers 'in the bathroom with well-known and beloved beauty, fashion and pop culture faces' and is one of the biggest online beauty platforms in the world.

Ellie, who has always wanted to be famous, signed to Zebedee Management, an agency which represents people with disabilities just over three years ago. She was the first model with Down’s syndrome to pose for Gucci Beauty - with her pictures appearing in Vogue Italia last July. The photo promoting the brand’s build-able Mascara L’Obscur on Gucci’s Instagram page became one of its most liked post ever, with a staggering 864,861 likes.

Since then, she has become a boundary-breaking “supermodel”, appearing on the front cover of Elle, Glamour, Allure and Euphoria in the last seven months alone. She has also modelled for Hollister, Avon, Zalando, My Theresa and You Magazine and was recently named by Glamour as their Gamechanging Model of the Year 2021. Ellie, who now has 64,000 Instagram followers, filmed the Beauty Secrets video in her older sister Amy’s bathroom, with help from her mum, Yvonne.

Yvonne, from Ilford in Essex, said: “We’re all incredibly proud of Ellie. The last 10 months have been a whirlwind and she’s been out on shoots most weeks. Ellie has done four front covers and she’s flown out to Germany and Sweden to do shoots. She absolutely loves it, she is so outgoing and confident and lights up the room when she enters. She always gets on well with the crew and often teaches them TikTok dances between shoots. I really enjoy watching her having fun.”

Ellie, who was diagnosed with Down’s syndrome at birth, is currently doing a Performing Arts Course at college in Redbridge in Essex. Yvonne said has always enjoyed performing and started attending drama and dance classes from the age of five.

She added: “She has always loved being in the limelight and in front of the camera, she knows exactly what to do at shoots, which really helps. My mum always said she had a feeling Ellie would be someone some day and my friends always say she should have her own TV show as she has a great sense of humour and is a natural on camera. Drama is her passion and she has been in lots of shows. She is very outgoing and wants to be seen and heard. She takes everything in her stride. She is very focused and knows exactly what she wants to do. In her spare time she loves dancing and socialising with her friends.”

A friend saw Zebedee Management on This Morning and encouraged Yvonne to put Ellie forward and she has been on their books since she was 15.

Zoe Proctor, who runs Zebedee Management with Laura Johnson, said: “Ellie joined Zebedee in 2017, when she was just 15 years old. We knew that she had something special about her at our first meeting. She has so much energy, smiles constantly, loves performing and generally just makes a fantastic model. The room lights up when she is around. We have only received fantastic feedback from all the teams that have worked with  Ellie. Her career really took off when she was featured in a Gucci Beauty x Vogue collaboration, shot by David Hyde. Since then she has been booked on so many huge campaigns and is working most days. She works so hard and maintains vibrancy and energy at every shoot she goes too."

"We also need to thank her mum and her sister who have supported her whilst her career has blossomed, ensuring that she is supported to get to shoots, or help her prepare her influencer content at home. We are absolutely over the moon that the Vogue team invited her to be part of the Vogue Beauty Secrets, alongside some of the biggest names in the world. She absolutely deserves it. It is not just great for Ellie, but also the wider disabled community, and society in general. Inclusion is so important, yet for some reason, disability has often been left out of the diversity debate. This collaboration between Vogue and Ellie helps challenge stereotypes, develop awareness, and encourages brands and wider society to be truly inclusive. This is part of the inclusion revolution, and in time, the positive representation of disabled people in fashion, beauty and wider society will be the norm, as it should be.”