Oldest Barmaid in the World is 100 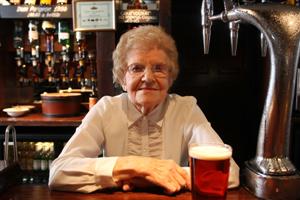 A great-great grandmother who is the OLDEST bar maid in the world is celebrating her 100th BIRTHDAY – but has no plans to retire.

Dolly Saville still works three days a week at The Red Lion Hotel in Wendover, Bucks, where she has been pulling pints for an incredible 74 YEARS since 1940. The pensioner started working at the bar when she was just 26 and King George VI was on the throne, Winston Churchill was Prime Minister and Britain was in the grip of World War Two.

Over the last seven decades she has served scores of famous faces, including actor Pierce Brosnan, former Prime Minister Ted Heath, footballer Stanley Matthews, wartime singer Vera Lynn, ballet dancer Margot Fonteyn and actress Elizabeth Taylor. Until six years ago when she was 94 she was still working at least SIX hours a day, SIX days a week and has only ever had TWO weeks sick leave. She has now reduced her work to three shifts a week, but still spends hours on her feet clearing tables, polishing glasses and serving customers.

The pensioner, who has three grandchildren, three great-grandchildren and one great-great granddaughter, has pulled and poured a staggering TWO million pints in the bar, which has been named Dolly’s in her honour.

“I love my work and I love the people, it keeps me going and it’s better than sitting around,” said Dolly, whose two children are long retired. “I never thought I would be here this long, but I’ve loved every minute of it. My family keeps asking if I want to stop, but I have no plans to retire. My boss is lovely and if he asked me to work an extra shift I would say yes as he has been so kind to me.”

Dolly was born in Eton, Berkshire, and moved to Wendover at the age of three. She left school at 14 and went into service as a house maid. She married in her late teens and her daughter Anne was born soon after, followed by her son Roland. When war broke out several years later, her husband joined the RAF and Dolly had to get a job to support the family. She had never done bar work before but was offered a job in the hotel by the landlord who spotted her walking past one day with her children.

“The landlord asked if I would like to work there, but I said no as I hadn’t worked in a bar before and I never thought anymore about it,” she said. "Then he saw me up the High Street and asked if I'd thought anymore about it. I said I hadn't but he said 'why don't you give it a try' so I said I would. I started just washing up glasses in the saloon bar. Then, after I'd been there about five or six weeks he said I think you could serve. I said 'Oh I don't think so, I'd give them the wrong change!' But I did, and I got on very well.”

When Dolly first started the 16th Century hotel had three bars, a public bar, a saloon bar and a cocktail bar, and she would work in all three. Her children, who were three and five at the time, would be left to play in the staff room or the beautiful hotel gardens.

“I worked in all three bars and over the years I’ve also cooked in the kitchen, done the bedrooms, the reception and the teas. I’ve done the lot,” said Dolly. “It has always been great fun and sometimes after a long shift I would be tired but we would go out dancing.”

Even after the hotel, which has historical links with Oliver Cromwell and Robert Louis Stevenson, was closed five years ago for six months refurbishment Dolly refused to give up work. Instead she went to the nearby King and Queen pub in Wendover.

"I was so sad when they closed for six months,” she said. "But I went to the King and Queen instead, they asked me if I would go there and I quite enjoyed that I must say! "I get very bored if I'm sitting too long. I must be doing something and working keeps my brain active. I think that comes from when I left school at 14 and I went into private service. You had to work then, there was no nonsense, and if you didn't do it properly you did it again.”

Dolly is now famous for being such a long-serving bar maid and is missed by the regulars if she is not around. Over the years she has also served many celebrities.

“I served Pierce Brosnan when he had lunch at the hotel while he was filming one of the Bond films,” she said. “I also made tea and toast for Ted Heath when he came in on a chilly afternoon. Vera Lynn has also popped into the hotel several times for lunch. I think everyone in the village knows me now.”

Dolly now works three lunch times a week. She added: “The hotel has changed over the years, Dolly’s bar used to be the dining room and we used to serve teas in the afternoon and I would clean all the brass. I was busy all the time and never minded what I did, I loved it.”

Dolly’s daughter Anne Edwards, 79, from Wendover, said until she was 94 her mum would work a morning shift, come home for lunch, then go back again in the evening. “She is remarkable and still works three shifts a week,” she said. “We suggested she should stop but she is determined to carry on and I think a lot of the customers would be up in arms if she left. When she started the job it was out of necessity, but I think it gradually became her life.”

Dolly’s granddaughter Kim Leemans added: “We tried to get her to retire years ago but she said no, so we gave up the fight and let her carry on and it keeps her going.”

Dolly's colleagues, who are holding a big party for her on her birthday next week (April 19), are also full of praise for her.

Martin Howard, manager of the hotel, said: “Dolly is an amazing person and the life and soul of the staff parties. She is still young at heart and the staff love her.” Robert Hynes, deputy manager, added: “She is amazing and the customers absolutely love her. She has told me she doesn’t want to leave until the day she dies. The younger members of staff aspire to be like her and think she’s brilliant. I think the job keeps her going and gives her something to look forward to. We get regulars who come in especially to see Dolly and in the run up to her birthday they’ve been travelling from further afield to see her.”

Hideko Arima, from Japan, was formerly the world’s oldest bar maid. She worked at her tiny bar, Gilbey Ai in Tokyo’s Ginza district for 52 years until she was 101. She died in 2003.