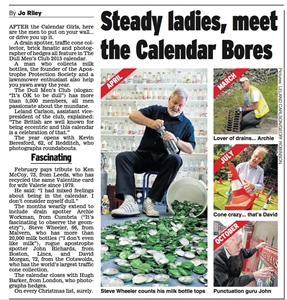 The twelve DULLEST men in Great Britain are featured in a new calendar.

A DRAIN spotter, TRAFFIC CONE enthusiast and BRICK collector are among the "boring" Brits who appear in The Dull Men's Club calendar.

A man who collects milk bottles, the founder of the Apostrophe Protection Society and a retired greenkeeper who loves lawnmowers have also made it into the top dozen dull men.

The Dull Men's Club has more than 5,000 male members, who are passionate about everyday mundane things, which others think are dull. Leland Carlson, assistant vice-president of the Club, decided to publish the calendar to celebrate the eccentricities of its dullest members.

"We wanted to have a bit of fun. The British are well known for being eccentric and this calendar is a celebration of that." he said.

The year begins with Kevin Beresford, from Redditch in Worcestershire, who is president of the UK Roundabout Appreciation Society, which he founded 11 years ago. Kevin, 62, spends his weekends travelling around the country photographing roundabouts and turning his pictures into books and calendars. February falls flat with Ken McCoy, 73, from Leeds in Yorkshire, who has sent the same valentine to his wife for the last 35 years. Ken, a novelist who designed the card himself, first presented it to wife Valerie in 1979 and has reused it every year since.

"I had mixed feelings when I was asked to be in the calendar as I don't consider myself dull, but it's a fun thing and all quite amusing," he said.

March's mundane man is drain spotter Archie Workman, from Cumbria, who works as a lengthsman maintaining verges and ditches.

He said: "I find the drain covers so interesting. There's a lot of history behind them. It's interesting to observe the geometry of the drains and how they interconnect. There's a whole world underneath us that we don't realize."

Steve Wheeler, 66, from Malvern in Worcestershire, who has spent 30 years collecting more than 20,000 milk bottles features as Mr April. He found his first bottle in the mid-1980s and now Steve, who admits he doesn't even like milk, houses them in an 80ft museum in his garden.

"I'm Mr April as this is the month I give the bottles their annual Spring clean," he said. "I've met some of the other people in the calendar and I think we are all the exact opposite of dull. It's just that we don't do the sport thing, we are individuals and not team players. I have people come to visit my collection from all over the world and I'm about to expand my museum by another 24 feet. Ironically I don't even like milk, I've always thought of it as baby food. But I do love glass. It's not only the bottles I love. It's the thrill of finding them and the people I meet when I'm collecting them." 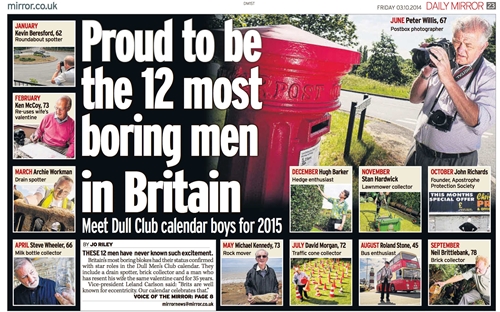 May is the turn of Michael Kennedy, 73, from Hunstanton in Norfolk, who spends two hours every day, except Saturdays, moving rocks to build a seawall. He has shifted more than 200 tons of rocks over the past 14 years to prevent erosion of cliffs lining the coast.

He said: "I used to walk to Old Hunstanton and back, two and a half miles every day, but that wasn't enough physical exercise for me. I started moving rocks and now I can't stop. It's better than sitting in an armchair. I'll do it for as long as I'm healthy."

Mr June is Peter Willis, 67, from Worcester, whose mission is to photograph as many of Britain's post boxes as possible and has already snapped more than 2,500.

David Morgan, 72, from the Cotswolds, has the world's largest traffic cone collection and features in July. He began collecting in 1986 and now has more than 500 around his house, including a Malaysian cone he found washed up on a beach in Sicily and a 1956 Lynvale rubber cone from Scotland.

"Some people probably think it's dull. If I go to dinner parties and tell people I'm a cone collector they quickly move on," he said. "My children are slightly embarrassed by my collection. I store them in the shed, the garage, the greenhouse and even under the bed. Luckily they stack well. I carry traffic cones with me in the car and if I see a rare one I ask if I can swap it."

Bus enthusiast Roland Stone, 45, from Plymouth has his own double decker and 300 model buses and appears as Mr August.

Neil Brittlebank, 78, from East Ardsley in Yorkshire, who collects bricks, is featured in September. The retired mine safety worker began his unique collection in 1990 when he heard Lofthouse colliery, where he had worked for three decades, was being demolished and he was given some of the bricks. Now he has more than 1,000 and constantly hunts for more at demolition sites and in abandoned buildings.

October's design features John Richards, from Boston, Lincs, who founded the Apostrophe Protection Society to combat the widespread incorrect use of the apostrophe.

Lawnmower collector Stan Hardwick, from Filey in Yorkshire, poses with his collection for November. Nicknamed The Lawn Ranger, he has enough in his collection to use a different one each day of the year and even keeps his favourites in the lounge.

The year finishes with Hugh Barker, from London, who has travelled Britain photographing hedges. He has written the book Hedge Britannnia, which includes information about hedge-laying and what hedges say about their owners.

The calendar also encourages other Brits to "celebrate the ordinary" by listing 125 of the most eccentric events they can attend in 2015 including the World Snail Racing Championships in Congham, Norfolk and the Great Christmas Pudding Race in Covent Garden, London. Other events featured are the Marmalade Festival in Dahlmain, Cumbria and the World Stone Skimming Championships in Easdale Island, Argyll.

The Dull Men's Club was originally started in New York in the 1980s and later spread to the UK and elsewhere in the world. Its main focal point nowadays is its website where members communicate, in a subdued, understated way, their quiet exploits.