Eight-Year-Old Is Youngest Drag Racer in the World 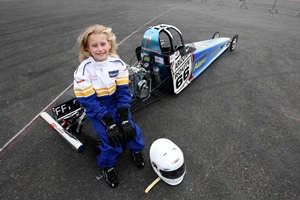 A British school girl has become the youngest drag racer in the world – just ONE DAY after her EIGHTH birthday.

Petite Belle Wheeler passed her drag racing driving test a day after she turned eight – the minimum legal age for youngsters to get behind the wheel.

The pint-sized dragster then went onto compete against youngsters more than twice her age and qualified for the UK National Finals – less than 24 hours after taking her test.

Belle, whose favourite colours are pink and purple, is still nine years away from the UK’s legal road-driving age, but the tiny blonde will now be spending her spare time speeding down tracks up to 50mph. Her 15-foot dragster, which was made in America, has been specially adapted for her small four foot four inch frame and can accelerate to 50mph in just 12 seconds. Until she turned eight she had never driven a dragster, but after just an hour’s tuition she sped through her test.

“It was amazing to get in the car and drive it all on my own,” said Belle, who has to wear specially made fireproof overalls when she races. I was really scared because at the end of the track you have to turn a corner and if you go too fast the car can tip over. It was quite hard to steer at first and keep the dragster going straight but I soon got used to it. I love going really fast and all my friends are very jealous. They can’t believe I get to go racing.” 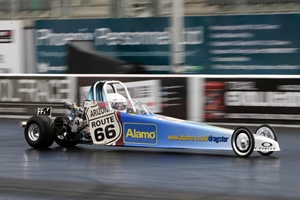 Belle is following in the footsteps of older sister Paige, who began racing 18 months ago when she was 11.

The girls, who also enjoy cheerleading, became interested in the high speed motor sport three years ago when the family moved to Wellingborough in Northamptonshire - just 10 minutes drive from the famous Santa Pod track. The family went to a fireworks display at the track, but it was the racing the girls enjoyed and soon they were dragging their dad Andy there every weekend to watch. Andy and his wife Dionne, 32, bought Paige a second-hand car on her 11th birthday and months later she won the FIA European Finals Event.

Now Belle hopes she will be equally successful.

“I don’t know where the girls get it from as no one else in the family races and until now I haven’t been into it,” said Andy, 38, a senior manager. “I never dreamed that with two young girls I would be spending my weekends at the race track. It is not what I expected them to be interested in, but they are obsessed by the sport so I want to support them. Belle has been looking forward to this moment for the last 18 months and recently she’s been sitting in her car and we’ve been pushing her around. I am worried about them racing such fast cars, but we reluctantly agreed for Paige to do it so we’ve got to give Belle a chance too. It is nerve-racking to watch them and doesn’t get any easier.”

Belle is using Paige’s old car, which has been specially adapted so her little legs can reach the pedals. She had to do three observed runs in front of race directors at Santa Pod in order to pass her driving test and get her licence. Andy then drove straight to the Motor Sports Association headquarters to collect her licence so she could compete in the National Finals the following day.

“Belle has been helping to clean Paige’s car and checking the tyre-pressure, so she couldn’t wait to actually get in and drive it,” added Andy. “I took her go-karting last week to get used to the steering, but she had never actually driven a dragster before. She did really well and seemed to be a real natural, everyone was clapping and cheering as she drove. The race directors thought she must have driven before as she was so good. Her reaction time was 0.02 seconds which would put her in the top five in a competition.”

Amazingly Belle succeeded in qualifying for the UK National Finals at Santa Pod. Race officials said she was the youngest ever junior dragster to compete in a UK national event. Next year the girls plan to compete in the UK, Sweden, Germany and the USA, which will cost around £25,000, including travel. The family hopes sponsorship deals will cover around £15,000 of this.

“They are very lucky girls. My first car cost £250 and I had to save for three years to buy it,” added Andy.