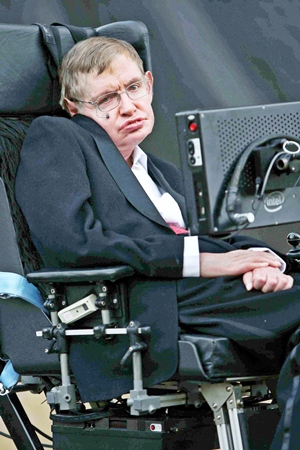 Professor Stephen Hawking may lose his famous computerised American VOICE. The world’s most famous physicist has been told to switch to new voice technology as his speech has now slowed to just ONE WORD a minute.

The Cambridge University professor is losing the use of nerves in his cheek which allow him to communicate by computer through an infrared sensor mounted inside his mouth. But Hawking is said to be reluctant to give up his world-renowned electronic voice he has had for 35 years.

“His speech has got slower and slower and on a bad day he can only manage about one word a minute,” said Judith Croasdell, his personal assistant. “We think it may be because of the deterioration in his check muscle. We are looking to improve the situation and he needs to test out new technology.”

Hawking, the best-selling author of A Brief History Of Time, caught pneumonia in 1985 and had to have a tracheotomy which left him unable to speak. A Cambridge scientist built a device that enables him to control a computer screen using his cheek for data entry, then have a voice synthesiser speak what he has typed. The set-up uses a predictive text entry system, but constructing sentences can take a long time and it is now even slower.

Hawking however says he has not heard a voice he likes better and identifies with it. “It is the best I have heard, though it gives me an accent that has been described variously as Scandinavian, American or Scottish,” he said.

The professor has now posted a job advert on his website for a technical assistant to start in February and help look after and maintain his voice as well as his unique wheelchair. His graduate assistant Sam Blackburn, who has been working with him for the past five years, is also looking at alternative technology including eye-tracking, brain scanning and facial feature recognition.

“Motor neurone is a progressive disease and it is possible that soon he will not be able to move any muscles at all,” he said. “He is certainly very reluctant to change and that is entirely understandable. The fact is that the entire world recognises that voice as Stephen and that is what he does not want to replace. To him it is his real voice. He has had this voice for 35 years, probably more than he had the voice that was produced by his vocal cords.”

Mr Blackburn said he hoped the professor would be able to keep his famous voice, but Hawking was worried about learning a new way of communicating. But despite the difficulties Hawking faces, Mr Blackburn said he would not consider retiring. “Stephen has repeatedly said he is not going to retire,” he added.