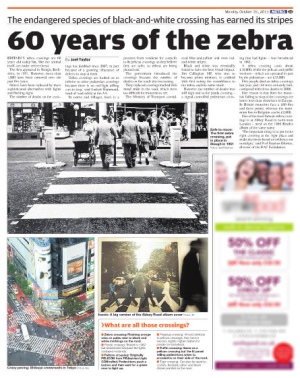 As the ZEBRA CROSSING celebrates its 60th anniversary in Britain experts say it is facing EXTINCTION.

The first zebra crossing was officially opened in Slough, Berkshire, on October 31, 1951 and the crossings have been a prominent feature of the British landscape for six decades.

But over the last five years more than 1,000 zebra crossings have vanished and many others have been replaced by fewer more sophisticated alternatives with lights and flashing signs.

Low fines and the reluctance of motorists to stop have also seen deaths on zebra crossings double in the last four years.

“Zebra crossings are looked on as inferior to other pedestrian crossings as there is no red light telling cars to stop,” said Andrew Hammond, head of road safety at the AA. “In towns and villages there is a pressure from residents for councils to fit pelican crossings as they believe they are safer, so zebras are being phased out.

“I suspect zebra crossings will continue to have a role in some busy city centres where they can be effective at helping people cross without constantly stopping the traffic. But in villages and towns I think they will eventually become extinct.”

The Government decided to introduce zebra crossings in 1951 as road traffic fatalities were mounting. Post-war Britain only had 10 per cent of its current traffic, but crossings were only marked with metal studs in the road, which were easy for pedestrians to see, but difficult for motorists. 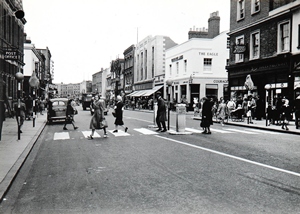 The Ministry of Transport experimented with different pedestrian crossing markings to help improve visibility and considered both blue and yellow stripes and even red and white stripes. Black and white stripes were eventually found to have the best visual impact and after they were introduced pedestrian deaths dropped by 11 per cent in the first year.

MP Jim Callaghan is credited with first noting the crossing’s resemblance to a zebra and the name stuck.

But despite their initial road safety success, by 1960 more than 500 people died on zebra crossings in the UK in just six months. This led to the introduction of the panda crossing in 1962, a signal controlled pedestrian crossing with lights. Government figures show five people were killed on zebra crossings last year and 144 people were seriously injured, compared to just three people who died in 2006.

One reason for this is the fines in Britain are considerably lower for a motorist prosecuted for not stopping at a crossing compared to many other countries. In the UK a motorist faces a £60 fine and three points on his or her driving licence. But in Italy, for example, the fine is anywhere from £111 to £443, while in Belgium the maximum fine can reach more than £2,000.

A zebra crossing costs about £10,000, while pelican and puffin crossings – which are operated in part by the pedestrian – cost around £35,000.

Last year 24 people were killed at pelican crossings, even though pedestrians feel safer if they have the protection of a traffic light. Mr Hammond said the solution is having more crossing points for pedestrians, even if they are not fully fledged zebras or pelicans.

“Zebra crossings could be downgraded so they indicate a good place for pedestrians to cross and motorists know to watch out for them, but are not legally obliged to stop,” he said. 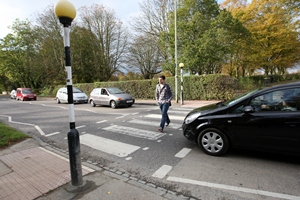 Professor Stephen Glaister, director of the RAC Foundation, said a lot had changed on the roads in the last 60 years. “Zebra crossings are iconic parts of the road network. But over 60 years a lot has happened,” he said. “The amount of traffic has increased nearly ten-fold and changing technology has meant new ways of helping us get over the road have been developed. The important thing is that we put in the right type of crossing at the right place and make decisions based on evidence not nostalgia. After that we need adequate enforcement of the law which says pedestrians have the right of way. It is not optional to stop at a crossing in use; it is compulsory.”

The Beatles brought international fame to the British zebra crossing in 1969 with their album cover for Abbey Road.