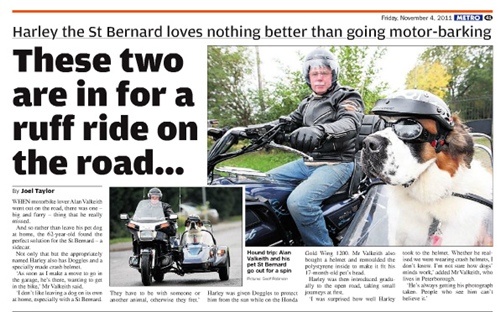 A petrol head pooch is living life in the fast lane after his motorbike-mad owners bought him his own SIDECAR.

Harley, a 17-month-old St Bernard, even has his own crash hat and doggles to go “motorbarking” on the side of the Honda Gold Wing 1200 at speeds of up to 55mph.

Owners Alan and Tina Valkeith, who are both retired, bought the bike and side car because they couldn’t bear to leave 12-stone Harley at home when they went out. 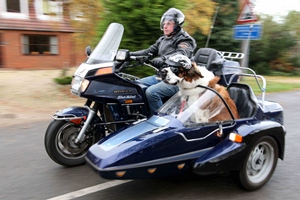 Now the thrill-seeking pup accompanies them on two or three outings a week shopping in the nearby city of Peterborough and has even gone for a seaside day trip to Hunstanton in Suffolk.

“We are both keen on motorbiking and didn’t want to give up our hobby once we got Harley as one of us would have had to stay at home and look after him,” said Tina, 47, from Turves, near Peterborough, Cambs. “We didn’t like the idea of leaving him at home all day while we went out as he would start to fret. So we came up with the idea of buying a side car and tried Harley in it up and down our road and amazingly he loved it. Now he comes with us wherever we go. As soon as he hears the sound of the engine he races to the garage and if Alan ever goes out on the bike without him he pines at the window.”

Alan has always been passionate about biking and has had motorbikes since he was 16. Tina became bitten by the biking bug when she met Alan, 62, and when the couple got married in 2004 they even rode to their wedding on a Harley Davidson. They bought Harley, who is 6ft tall on his hind legs, when he was eight months old from a family who couldn’t cope with the large dog. Now Alan rides the Honda, with Tina on the back and Harley in the side car. The couple have even bought the hound his own doggles and a crash helmet so he is safe on the road.

“He loves going in the side car but we found the wind was getting in his eyes and they were burning,” she added. “If it continued he could have gone blind so we ordered some special dog goggles from the internet, which has made him much happier. “We also got him a crash helmet from America, which Alan cut to size, so he can be safe. You can actually buy crash helmets for dogs but none of them were big enough for Harley. He tried to pull it off to begin with but now he has got used to it.” 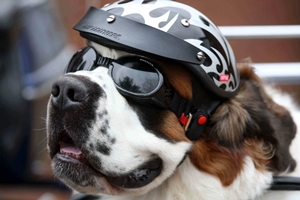 Harley is strapped into the sidecar with a harness so he can’t leap out while the bike is moving.

“He is very good and will actually sit there all day, he loves it so much,” said Alan. “If he starts to fidget it means he needs the toilet so we have to pull over and stop. On long journeys he rests his head on my arm and even falls asleep. He attracts a lot of attention from other motorists, who stop and take pictures. Some people try to overtake us so they can get ahead and take a good photo. We see lots of people do a double-take because they can’t believe there is such a big dog in the side car. It’s nice because it makes people laugh and smile. It’s also lovely that we can all go out together.”

But Harley is only a fair weather passenger and the couple can’t take him out if it is raining as he doesn’t like the rain cover.“It’s a bit of a problem as he hates the rain cover on the car so we can only take him out if the sun is shining, I’m not sure how it’s going to work during the winter,” added Tina.