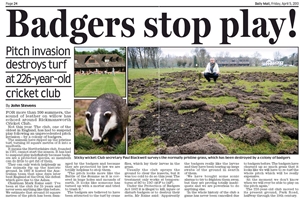 One of the OLDEST cricket clubs in the WORLD has been forced to cancel their season after the entire pitch was dug up and destroyed by BADGERS.

Rickmansworth Cricket Club, which has been in existence since 1787, was due to start its season on April 20 but a colony of badgers has left huge holes in 50 square metres of the manicured turf.

Club members have been forced to sit and watch helplessly as the pitch in Hertfordshire, which has hosted games against the Australia team for the last 130 years, has been turned into a mud bath by the protected mammals.

“I’ve been at the club for 25 years and never seen anything like this before,” said chairman Mark Raine. “We estimate that around 50 square metres of the pitch has been damaged by the badgers and because they are protected by law we are totally helpless to stop them. The pitch looks more like the Battle of the Somme as it is covered in huge holes and mounds of earth. It looks like someone has turned up with a mortar and tried to trash it.”

The badgers are understood to have been attracted to the pitch by a type of fly which lays its larvae in the grass. Under normal circumstances the club in Park Road, Rickmansworth, would put a spray down to clear the insects but this year has been unable to do so due to the cold weather. Any attempt to remove the badgers is likely to contravene the Protection of Badgers Act 1992 which makes it illegal to kill, injure or disturb badgers or to destroy their setts.

“Apparently the badgers really like the larvae and they have been tearing up large swabs of the ground in search of them,” added Mark. “We would have put a spray down to get rid of the insects, but unfortunately it has been too cold and now we have been left with a badger invasion. The cricket pitch is near to open fields and there are so many holes we believe it must be a sett of badgers at work. We have bought some sonic alarms to try and frighten them away, but they are proving totally inadequate and we are powerless to do anything else.”

He said the pitch was completely destroyed around the main square and the scheduled games had been postponed indefinitely.

“In the whole history of the club a game has never been cancelled due to badgers before,” he said. “The badgers have churned up so much grass that it looks like we will have to re-turf the whole pitch which will be really expensive and we don’t have the finances to do it. At the moment we don’t know when we will ever be able to play on the pitch again.”

The club, which is more than 225 years old, moved to its present grounds in Park Road in the 19th Century and it has hosted some memorable games over the years. In 1882 it hosted the touring Australians and won by four wickets. Just nine days later the Australians beat England at the Oval in the game that gave birth to the Ashes. The following year the Australians returned and defeated Rickmansworth by nine wickets. For the next 50 years Rickmansworth would continue to host touring sides containing some of the best International players.