Pooch With a “Pilot” Licence 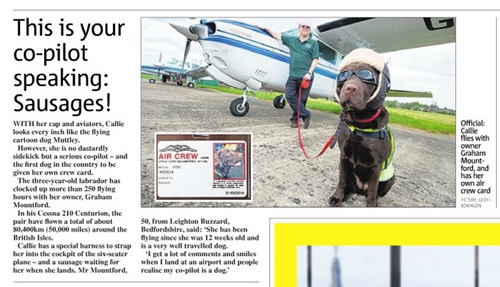 A pooch pilot with more than 250 flying hours has become the only dog in the UK to have her own crew card.

Canine captain Callie, a chocolate Labrador, has flown a massive 50,000 miles around the country with owner Graham Mountford in his Cessna 210 Centurion.

The three-year-old pet pilot flies almost every weekend and has touched down at airports across Britain, including Cornwall, Wales and the Scottish Islands. Callie has a special harness to strap her into the cock pit of the six-seater plane and always has a sausage waiting for her when she lands.

“She has been flying since she was 12 weeks old and is a very well-travelled dog,” said Graham, 50, from Leighton Buzzard, Beds. “I get a lot of comments and smiles when I land at an airport and people realise my co-pilot is a dog.” 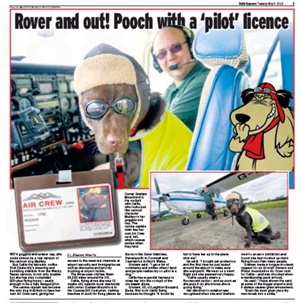 Graham has been a private pilot for 13 years and started taking Callie up in the air with him when she was just three months old.

“I used to go flying with friends, but when we got Callie three years ago I thought it would be fun to take her up in the plane with me.” he said. “I bought some small ear protectors for her to wear and the first time we just taxied around the airport to make sure she enjoyed it. It all went well so we then went on a short flight and she took it all in her stride and seemed very happy.”

Now the pair fly most weekends, visiting beaches such as Barra in Scotland, Perranporth in Cornwall and Caernarfon in Wales, where Callie enjoys a run on the sand and a sausage.

“She usually sits next to me in the front of the plane but if other people come with me she will stretch out on the back seat,” added Graham. “Callie usually wears a fluorescent jacket and as soon as she puts it on she knows she is going flying. She loves dressing up for the part.”

The puppy pilot has now been given an Aircraft Owners and Pilots Association (AOPA) air crew card, which entitles her to a host of VIP benefits.

He said: “I went to an AeroExpo exhibition and visited the AOPA stand and they decided Callie had more flying hours than many humans, so I jokingly asked if she could have a crew card.”

Graham was shocked to receive a membership pack in the post for Callie a week after his tongue-in-cheek request. The card gives Callie a number of privileges, including going through the Crew Only channel at security and immigration in airports, discounts and priority booking and check out at most airport hotels and car hire.

“I have shown the card, along with mine, at some of the bigger airports and it always causes great amusement. Even the most glum security men break into a smile.” he added.