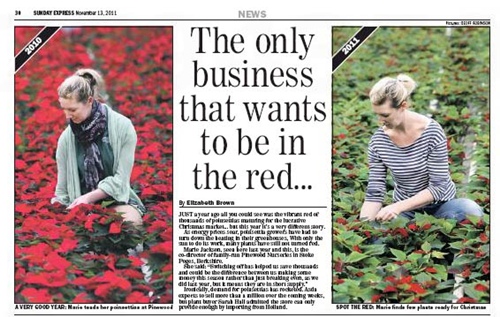 Thousands of British poinsettias are still GREEN compared to this time last year as UK farmers struggle in the credit crunch with high heating and growing costs.

Growers have had to rely simply on the sun to heat their greenhouses this season after a massive 50 per cent price hike in gas prices over the last year.

This means the pot plants, which are usually flaming red by now, have not had as much heat as usual to colour the leaves and they are a week behind.

Demand for British poinsettias is always high because the festive flowers are better quality and longer lasting than those grown on the continent. But other farmers have had to stop growing the festive flowers altogether, which could see a huge shortage of them this year. At Asda supermarket 50 per cent of its poinsettia supply will come from British growers this year – compared to 80 per cent last year. Families are now being urged to start buying the plants as soon as they hit the shelves as supermarkets and garden centres are likely to run out of home grown poinsettias.

“Gas prices have gone up an astonishing 50 per cent in the last year, so we have been relying on the warm autumn weather to heat the greenhouses,” said Marie Jackson, 30, co-director of the family run Pinewood Nurseries in Stoke Pugess, Bucks.

“It has helped us save thousands of pounds and will be the difference between us hopefully making some money with the crop this season rather than just breaking even, as we did last year. There are less growers in the country now as so many smaller independent farmers are struggling to make it financially viable with heating costs so high. I know of at least one nursery which usually supplies half a million poinsettias, which has given up growing them this year as it’s just not worth it for them. If people want a British poinsettia they should get one soon before supplies run out as there will only be a limited amount available this year.”

Sales of poinsettias have rocketed in recent years and are now Britain's second most popular pot plant, beaten only by the orchid. Around five million are bought each year - almost all in the run-up to Christmas - and many are imported from abroad to meet demand. At Pinewood Nurseries Marie, her sister Elizabeth Robinson and her brother-in-law Tom Robinson now run the family business, which has been growing poinsettias for the last 12 years. They grow an incredible 50,000 poinsettias every season in a two acre greenhouse and supply the plants to supermarket chain Asda and sell them in their farm shop. This year the family has waited until only the last few days to switch on the gas heating, which has saved money but left the crop behind in colouring up.

“Luckily it has been a really mild autumn so the plants reached their correct height at the right time,” added Marie. “But the leaves have been slower to turn red, so we’ve now put the heating up a few degrees to help them along. I think the crop should have caught up in about a week and should be an amazing spectacle. We usually get people coming from miles around to see the plants as they create such a sea of red.”

The plants, which are produced from cuttings imported from Kenya, are planted in July and grown slowly over five months. The greenhouses are usually kept at a constant temperature of 18 degrees, but this year it has dipped below that. The plants are watered daily until they grow to an average of 30cm.

“Poinsettias are an expensive and difficult crop to grow as there are quite a few things that can go wrong,” said Elizabeth Robinson. They need to be monitored daily to ensure the temperature is correct and they have the right amount of water. Lots of people think poinsettias don't last very long but that's often because they have bought one grown on the continent. In Britain they are grown over six months but in Holland they are often planted in September between other crops and grown quickly with artificial light. This means they are more spindly and more susceptible to dying.”

The family hopes to continue growing poinsettias, but fears it may eventually become one of the only growers in the country.

“We are lucky because we have a lot of support from our local community who all come to buy their poinsettias here,” she said. “We also get lots of people coming from miles around to see the poinsettias, which are a huge spectacle because they create such a sea of red. As long as we get lots of customers paying a realistic price and the temperatures stay fairly mild then it is profitable. I think many of the locals would be upset if we were to stop selling poinsettias.”

Peter Burn, director of Bordon Hill Nurseries in Stratford-upon-Avon, said British growers were also suffering as prices of poinsettias were being pushed down because of over supply from countries such as Germany and Holland.

“The heating costs have increased significantly over the past five years so we now have to focus on premium outlets which will pay a good price for poinsettias,” he said. “A lot of British growers have had to stop because of the rising heating costs and so there will be a smaller supply of British poinsettias this year.”

A spokeswoman for Asda said it was committed to supporting British growers and was sourcing 50 per cent of its stock from five UK based growers this year.

Sarah Hall, plant buyer for Asda added: “There’s a real shortage of British poinsietta growers this year and whilst we nurture smaller nurseries to try to grow more we have to source additional supplies from Holland. Our festive plants are looking better than ever; we’re expecting a 30 per cent increase in demand this year with over one million poinsettias expected to be sold from now until Christmas.”