Winter Drought in Parts of Britain

Homeowners in parts of Britain have been told to reduce their water consumption because of a WINTER drought.

East Anglia has experienced some of the lowest levels of rainfall since records began this year, heightening fears of a water shortage next summer.

The counties of Cambridgeshire, South Lincolnshire and Northamptonshire only had HALF the normal rainfall during September and October and with the mild weather continuing this month there are concerns the water reserves will reach a critical level next summer.

Anglian Water has now applied for a winter drought permit, so it can drain extra water from the River Nene to feed its reservoirs in Pitsford and Rutland Water, which are only half full. Farmers are also irrigating at night time to reduce the amount of water evaporating as the November weather is so warm.

"It may seem strange as you usually think of having to save water when it is hot," said Ciaran Nelson, of Anglian Water. "But in fact this is the time of year when we need to save water the most as the reservoirs should be filling up ready for next spring. The lack of water is the result of consecutive dry seasons. We had 20 per cent less rainfall than usual last winter, the driest spring in 80 years, then 50 per cent less rain in September. We have had a whole year of unusually dry weather."

Anglian Water has applied to the Environment Agency to drain an extra 17 million litres a day from the River Nene between December and April. If it is granted in the next couple of weeks it will be able to fill its reservoirs at Pitsford and Rutland, which are currently only 56 per cent full. Anglian Water is also spending an extra £6.8 million to reduce the number of water leaks in the region and recruiting 60 more leakage experts. The Environment Agency is asking residents not to waste water and to ensure they turn off taps when brushing their teeth. 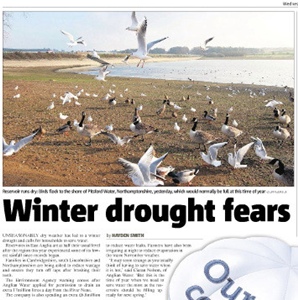 David Hawley, a manager for the Environment Agency, said: "Balancing the needs of people, businesses and the environment for water has been a difficult job this year. Farmers have been working hard to make the best use of the water they have and we've been busy planning supplies and monitoring what's going on. But if we have a dry winter, this could make next year far more difficult for everyone than this year has been. That's why we're asking everyone to look at their water use and see how it can be reduced now so that there's enough to go around next year too."

Environment Secretary Caroline Spelman said: "Farmers, water companies and other abstractors have worked really hard over the summer to help keep our rivers flowing and head off any threat of hosepipe bans. Northamptonshire and South Lincolnshire are amongst a number of areas taking steps now to safeguard the water supply next summer and, despite our reputation as a rainy country, planning for unreliable rainfall is something we all need to do."