Sprouts Bigger Than Normal This Season 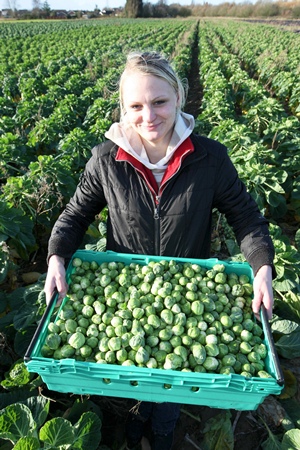 Everyone claims to hate them so not all will be pleased to hear this Christmas is set to be a BUMPER year for British Brussels SPROUTS - which are 20 PER CENT BIGGER than normal.

British farmers say it has been an exceptionally good year for the much-loathed green vegetable which has ripened THREE WEEKS early this year. This year's crop of sprouts is also bigger - weighing 25g instead of 20g - sweeter and more flavoursome, thanks to the unusually warm winter weather.

"It has been a really good year for sprouts and the yields are much higher than they have been for the past six years," said John Lankfer, who grows 70 acres of sprouts on his farm in Wisbech, Cambs.

"I think it's all been down to the growing conditions throughout the year. The dry spring helped the roots go down well, and then we had rain in the summer to help the plants. The recent mild weather has also helped them grow more quickly so the sprouts are around three weeks ahead of schedule and much bigger than they would normally be when picked."

Experts at the ‘Love Your Greens’ campaign said the mild autumn and recent dry weather had helped produce a spectacular crop of sprouts this year.

"The mild dry weather has been really good for the crop and helped produce very high quality sprouts," said a spokeswoman for the group. "There was a concern we would have too many sprouts too early but the cold snap over the last few days means they are back on track."

Last year the UK suffered a shortage of sprouts due to the freezing weather. Snow and ice left British crops frozen solid and impossible to harvest by machine. But this year more Brits than ever before are expected to be tucking into sprouts with their Christmas dinner, thanks to the good quality of the crop and their sweeter taste. Sales of sprouts have actually seen a dramatic rise over the last few years.

There has been an increase of more than 12 per cent in sprout sales already this year, according to data analysts Kantar Worldpanel. Their figures show Brits spent £53 million in 2010 and £60 million this year, a rise of £7 million. Around 40,000 tonnes of sprouts - almost the weight of the Titanic - have been sold in the UK in the last 12 months.

"Sprout sales are going up year on year, possibly because they are sweeter than they used to be  and they don't need a frost to make them taste nice anymore," added Richard Mowbray, commercial director of one of the UK's largest sprout growers, TH Clements in Lincs. "Last year we had very low yields of sprouts because of the weather, but this year we've had great growing conditions and there will be good availability. I'm optimistic for a great sales year."

The Love Your Greens campaign said sprouts had also become more popular in Britain because modern varieties and growing techniques meant sprouts were not as bitter as they used to be.

"New varieties have made a big difference and the growing techniques have been refined," added a spokeswoman. "Also the human palette has changed over the years and people now like more bitter food anyway. People have also become more conscious about eating their five fruit and vegetables a day and sprouts are full of goodness."

John Lankfer is also encouraging people to eat more sprouts by growing a special sweet-tasting purple sprout. The unusual sprouts - which have a similar purple-red colour to red cabbage - have a nutty, slightly sweeter taste than their pungent green cousins. He began growing them last year and now has 20 acres of the variety, which he sells through Morrisons supermarket.

"I wanted something a bit different that would add novelty value to the Christmas dinner plate," he said. "They have proved really popular, they taste nutty and are more healthy than green sprouts as they contain a higher level of antioxidants."

UK growers produce 264 million sprouts for the festive season with Christmas accounting for more than 67 per cent of the annual consumption. Brits eat more sprouts than anyone else in Europe. Ready-prepared sprouts have seen a particularly large boost in supermarket sales over the last year. A single sprout typically contains three times as much vitamin C as an orange.

Sprouts were believed to have been cultivated in Italy in Roman times, and possibly as early as the 1200s in Belgium - thought to be the origin of the name 'Brussels sprouts'.