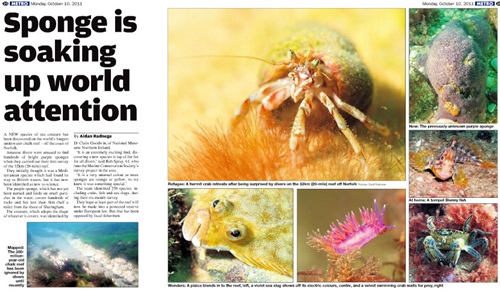 A new species of sea creature, which has never been seen anywhere else before, has been discovered on the world’s longest underwater chalk reef – off the coast of NORFOLK.

Amateur divers were amazed to find masses of the bright PURPLE SPONGE when they carried out their first indepth survey of the 20 mile reef, which is teaming with colourful, fish, plants and wildlife.

They initially thought it was a Mediterranean species, which had found its way to British waters but incredibly it has now been identified as new to science.

The purple sponge, which has not yet been named and feeds on small particles in the water, covers hundreds of rocks on the reef, which lies just half a mile from the shore of Sheringham on the north Norfolk coast. The creature, which adopts the shape of whatever it covers, was identified by Dr Claire Goodwin, of National Museums Northern Ireland. 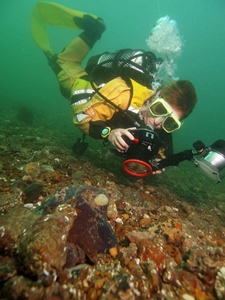 “It is an extremely exciting find, discovering a new species is top of the list for all drivers,” said Rob Spray, 44, who runs the Marine Conservation Society’s survey project Seasearch in East Anglia with partner Dawn Watson. “It is a very unusual colour as most sponges are orange or yellow, so we knew it was something special. We got a scientist to take a sample and she confirmed it was a unique new sponge, which had never been seen anywhere in the world before. “It’s quite extraordinary because it can be found just 100 yards from the shore and on the reef there is lots of it completely covering rocks the size of melons so it is very easy to spot.”

The full extent of the chalk reef, which is 400 metre thick in some places, was only discovered last year when Rob and his team of volunteer divers mapped its complete 20-mile length. The remarkable rocky plain lies just eight metres under the North Sea and has been hidden for 300 million years. The amazing natural phenomenon features massive two-metre high rock arches and four-metre deep gullies where the water has worn away the chalk. The miles of smooth white chalk, which look like a moonscape, have remained relatively untouched until this year when the diving team started to carry out a full analysis of the site.

They have spent the last six months surveying the stunning reef habitat and uncovered more than 250 different species living there, including purple sea slugs, vibrant orange anemones and red seaweed – more akin to the Red Sea. They also found three species never recorded on the East Anglian coast before, including the Leopard Spotted Goby and two rare anemones – the Strawberry Anemone and Ancula gibbosa.

“Although the reef has been there millions of years our understanding of it is only just beginning,” said Rob. “There are moon-like areas of chalk, then vast stretches which look like heathland as they are covered in algae. It is teaming with wildlife and many of the species we have found would normally be seen in much warmer waters. During the summer the water off East Anglia is the warmest in Britain so it feels like the Mediterranean, but in the winter it gets very cold, so you end up with tropical species that are tough.

“We have also found there are certain things which seem to thrive in a chalky environment, such as the sponge. We are now keen to explore the other two smaller chalk reefs off the east coast and see if the purple sponge is there too.”

Rob, who has been diving in the North Sea with Dawn for 13 years, hopes to continue the survey of the reef, which stretches from Cley Next the Sea to Trimingham, next May. They also hope at least part of the reef will now be made into a protected reserve under European law, where no fishing or industrial activity will be allowed.

“Despite the importance of the area to the resident eco-system and the local fisheries there is no area set aside to allow the chalk to achieve an undisturbed state,” added Rob.

But this has been opposed by local fishermen who say it would damage their industry and the government is due to make a final decision next year.

The diving team also conducted a seaweed survey of the North Sea, from The Blackwater Estuary in Essex to Seahouses in Northumberland this summer and uncovered 131 types of seaweed, including the “reflexed grape weed” and three other non-native types.