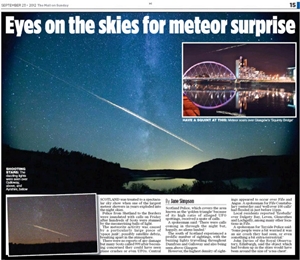 Photographers have captured a photo of a meteor spotted in the night sky above Britain.

The bright lights were seen streaking through the sky in the North of England, Northern Ireland and Scotland.

Many people in Manchester, Leeds and Blackpool have also been posting pictures of the meteor.

Jim Ramsay, 44, spotted the bright light while taking pictures of the night sky near Squinty Bridge in Glasgow city centre.

“I was taking photos when I suddenly saw this really bright white light approaching,” said Jim. “It kept coming towards me and I wondered what it could be as it didn’t seem like a plane or a helicopter and was too bright for a Chinese lantern. It was visible for at least 45 seconds, then it split into about 10 pieces all travelling at the same rate, before disappearing. It was really spectacular and the talk of the town afterwards.”

Civil engineering student Craig Usher, 23, was taking photos of the north star at Loch Thom in Scotland when he saw the meteor out the corner of his eye.

“I suddenly saw this flash out of the side of my eye and saw a meteor breaking into about 20 pieces,” said Craig, who is a student at Glasgow University. They were heading relatively slowly across the sky so I quickly turned my camera around and started taking some photos. I was absolutely gobsmacked to see the meteor and really pleased to have got the pictures.”

Meteors are particles from space that burn up as they plummet through Earth’s atmosphere, sometimes emitting light and creating a “fireball” effect.

Meteorites are larger, more durable objects that survive heating in the atmosphere and land on Earth.