The son of vicious swan Mr Asbo is following in his father’s footsteps by terrorising punters on the River Cam in Cambridge during the peak summer season.

The feathered fiend, who has been nicknamed Asboy, is targeting terrified tourists as they row and punt on the famous Backs in the university city.

His dad, Mr Asbo, was moved to a secret location by the river authorities two years ago and had his wings clipped to stop him returning after he repeatedly attacked and bit rowers. Now he has been replaced by Asboy, who rules the roost on the River Cam by swimming up and down pecking at punters and flying into families on the waterway.

The swan attacks any boat which gets too close, including canoes, rowing boats and motor homes. At their last meet the river authorities, The Cam Conservators, also revealed the bad tempered bird had attacked a canoeist and a swimmer. 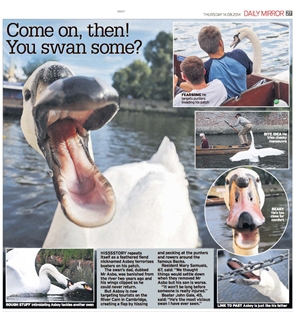 “He’s the most vicious swan I have ever seen. When I was punting with my family he stuck his neck in the boat and hissed and pecked at us,” said John Gale, 45, from Cambridge. “I even saw him trying to bite through the chains which tether the punts to the wall of the river. My children were terrified and lots of people are now worried about going out on the water in case they are attacked.”

Resident Mary Samuels, 67, who lives near the river, said many believed Asboy was now worse than his dad.

“He swims up and down the river as if he is patrolling it and flaps his wings and hisses at anything which gets in his way,” she said. “We thought things would settle down when they removed Mr Asbo, but his son is much worse. There have been some near misses and I don’t think it will be long before someone is really injured.”

The Cam Conservators moved Mr Asbo to a secret location about 60 miles away in 2012 because they said his behaviour was risking the safety of river users as well as himself. His behaviour left dozens of rowers with cuts and bruises and a special marshall even had to be employed during a university rowing race to prevent him from injuring the students.