Daffodil Festival without the Daffs 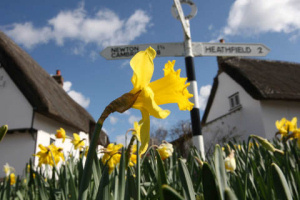 For the first time in 40 YEARS not a single daffodil has bloomed in time for Britain’s biggest Daffodil Festival.

More than 10,000 people from all over the UK visit the tiny village of Thriplow in Hertfordshire each year to admire its hosts of golden daffodils.

But for the first time since the annual Spring festival began in 1969 there are no brilliant yellow blooms after the UK had its coldest winter for 30 years. Disappointed visitors, who come by the coach load from across the country, will be greeted by green stems instead of glorious displays of daffodils.

"It is very disappointing. Some of the daffodils are in bud but like everywhere else they are behind this year and not flowering," said Lynne Turner, a member of the village’s daffodil committee.

"It is very unusual and the first year that I know of where the daffodils haven’t been out.

"It’s a bit hard as I have to do all the publicity months in advance and I don’t know what the weather will be like so I say the village will be swathed in daffodils and nine times out of 10 it is.

"We plant early, middle and late flowering varieties of daffodil to try and outwit the season but it doesn’t always work."

The village of Thriplow, eight miles south of Cambridge, started its famous Daffodil Weekend in April 1969 to raise money to repair its church, St George’s.

A number of parishioners opened their gardens to the public and the first event attracted more than 1,500 visitors.

In 1976 the villagers planted a massive three tons of daffodil bulbs along the lanes in Thriplow and the incredible sea of yellow began attracting thousands of people.

The tradition has since continued every year except for 2001 because of the foot and mouth outbreak.

It was even held in 1994 when the daffodils were buried in an inch of snow.

"Some people have asked if we are going to cancel or postpone the festival this year, but it would be a nightmare as I start the advertising in September," she added.

"The daffodils actually came up when they were supposed to but we had another cold snap which held them back.

"We just haven’t had much warmth this year, but we hope if the sunny weather continues this week some of the daffodils may still flower in time.

"On the positive side we do have lots of beautiful snowdrops and winter aconites still in bloom."

Despite the absence of daffodils, the villagers are still expecting lots of visitors this weekend.

"There is more to the festival than just daffodils, it’s a celebration of Spring and one of the first outings of the year for many people," she added.

"The British public are happy to wrap up warm and we hope they will come anyway."

Daffodils, which come in 2,500 varieties, stop growing when temperatures are below 6C.

The UK produces half the world’s daffodil bulbs, exporting 10,000 tons a year.

In Cornwall the season can sometimes start in early January, while growers in Lincolnshire usually start to pick their flowers at the beginning of February.

This year the cold weather has seen a shortage of daffodils with the price of a bunch on the wholesale market almost doubling from 15-25p per 10 stems to 25-40p.