Daisy’s Rainbow Walk For The NHS 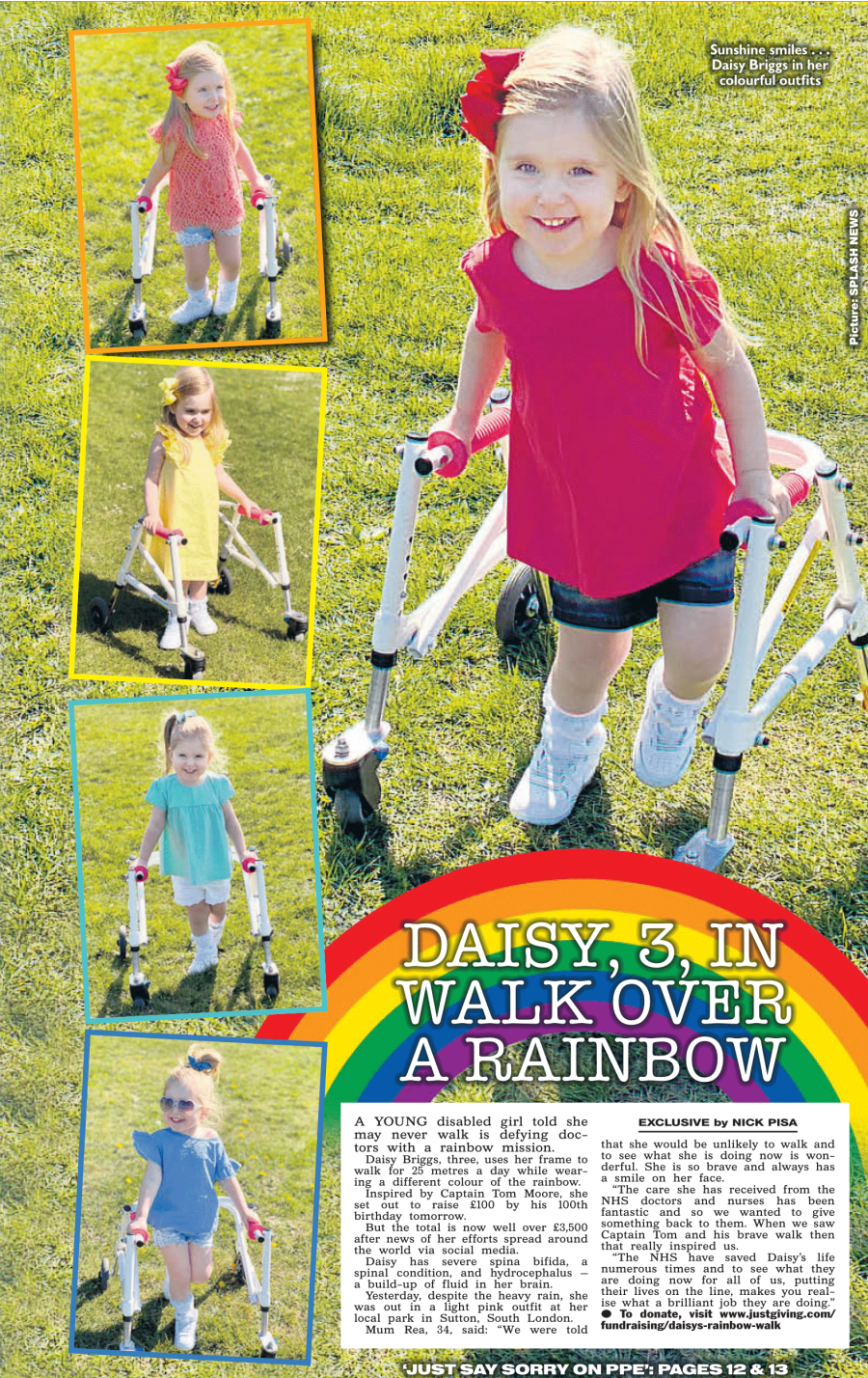 A pretty three-year-old girl who was expected to never walk has defied the odds to do a rainbow walk to raise money for the NHS after being inspired by Captain Tom Moore.

Little Daisy Briggs was diagnosed with severe Spina Bifida, a spinal condition, and Hydrocephalus, a build-up of fluid in her brain, during mum Rea Briggs’ 20-week scan. Rea, 34, from Sutton in South London, was given the option to terminate her pregnancy after being told Daisy would probably be in a vegetative state when she was born and her chances of walking were almost impossible.

But remarkably Daisy, who was also born with talipes, a club foot, caught suspected meningitis when she was a few days old and has since had three brain surgeries, has fought back and is now able to walk 25 metres at a time using a frame. Daisy is now walking 25 metres every day for a week, wearing a different colour of the rainbow to raise money for the NHS. The family had hoped to raise £100 before war veteran, Captain Tom’s 100th birthday on April 30, but donations have already reached a staggering £2,200.

“I’m so proud of Daisy, from what we were told by doctors before she was born to how she is now, it’s absolutely incredible. She is a fighter and has worked very hard,” said Rea. “We wanted to be able to help raise money for the NHS, which has saved Daisy’s life on a number of occasions. Daisy’s favourite time of the day is her daily walk and she loves being outside. We were inspired by Captain Tom and decided to make it into a rainbow walk to raise money and we have been blown away by the number of donations.”

Daisy had an operation to close her back at St George’s Hospital when she was just 17 hours old. She then caught suspected meningitis a few days later and she was on antibiotics for three weeks. Doctors noticed her head circumference was getting bigger and at four weeks old she had a shunt fitted to drain away the fluid from her brain, caused by her Hydrocephalus. Daisy was finally allowed home from hospital when she was five weeks old.

“Amazingly she sat up within the normal time frame and her crawling was only slightly delayed, then when she was two and a half she started walking with a frame,” said Rea. “She is gradually building up her muscles and can now walk 25 metres at any one time. We still don’t quite know how much feeling she has in her legs as she is still non-verbal.”

Since Daisy was born she has had two further brain surgeries and three other surgeries, including two for her talipes, but Rea said she is always happy and smiling. Daisy was signed by modelling agency Zebedee Management when she was 18 months old and she has also just done her first shoot for Numi Kids.

“She absolutely loved it and really enjoys being in front of the camera,” added Rea.

The money raised by Daisy’s rainbow walk will go to NHS Charities Together.